3 reasons why learning to "horribly injure someone" isn't "self defence"

A particular approach in reality-based self defence (RBSD) is becoming increasingly popular: that of learning how to inflict maximum damage to dangerous attackers.

On paper this approach looks like it could have merit - and correspondingly any criticism (of the kind I'm about to make) might seem to be totally inappropriate.

After all, consider this example:


"He came in the door of my office and shot two people already. I saw him drop down for a reload. When he dropped down for the reload, I was able to tackle him and get him on the ground. Then the first thing I saw was his eye, and I gouged his eye out, which stopped him from going on."

I got this from an article titled "How to Horribly Injure Someone". And yes, it is worded in such a way as to be rather unobjectionable in philosophical terms: first an horrific scenario is created - one where the worst violence is not only justified but arguably required. Next, the use of that violence is posited and you are invited to challenge that use (which, of course, you cannot).

All that's left is for a particular RBSD school to point out that while most people can stomp quite effectively on a can of Coke, they can't really stomp on a human head. It seems that people need to be taught to be violent. Enter the aforementioned RBSD school.

Anyone like me coming along and criticising this sort of approach will seem like a namby-pamby, goody two shoes who is all about "theory" rather than "reality".

And it will seem particularly namby-pamby of me to argue against such approach when 2 other examples where such violence would be totally inappropriate have already been canvassed, namely:


"A guy comes into the bar and pushes me, and tells me that's his seat, so I reach out, and I grab his hair, and I gouge his eye out."


"I'm pulling into Whole Foods. I'm waiting for a parking spot for two minutes. A guy comes in with a Mercedes and grabs my spot. I get out of the car, pull him out of his car, throw him up against the car, and gouge his eye out, your honor."

Um - no. I guess those aren't appropriate...

But I'm sorry to say, I can't let this one go through to the keeper. Because, in my view, the "injure your attacker horribly" approach to RBSD is so totally flawed that I can't help but see it as the height of irresponsibility as regards self defence advice/training.

Look, don't get me wrong: in the first scenario where it's justified, I haven't got any issue with the approach (at least, not in principle: if you think gouging someone's eye is easy, you're in for a rude shock). If you have some terrorist or other mass murderer coming at you after killing other people, you're probably going to want to know "how to horribly injure" that murderer. But as a general RBSD guiding principle, the approach is highly dangerous (for you and others) and deeply inappropriate. Why do I say this? For the following 3 reasons:

1. What kind of violence are you likely to face?

Violent crime rates are plummeting in the US and the rest of the developed world. They have been plummeting for many decades now. Your chances of facing a scenario of the kind warranting eye-gouging are slim. That's not to say the chances are non-existent: they just don't register much on the scale of things you should prioritize.

Consider: the odds of encountering terrorism for US residents are still around 1 in 45,808. Yes, they face a much higher risk of murder (1 in 249) or assault by gun (1 in 358) but the latter statistics include killings and assaults that are carried out when people are sleeping, breastfeeding or in myriad other situations where they would be unlikely to have the opportunity to pre-empt the attack with an eye-gouge or other "horrible injury".

Statistically speaking, what kind of violence is someone in the West far more likely to face? How about a domestic altercation? Or (if you are a man) a fight outside a pub with a drunken yobbo? Or (if you are a woman) a sexual assault on a university campus?

In respect of the last of these, consider the case below and ask yourself how "necessary and reasonable" an eye-gouge etc. would have been in the context of such an assault. 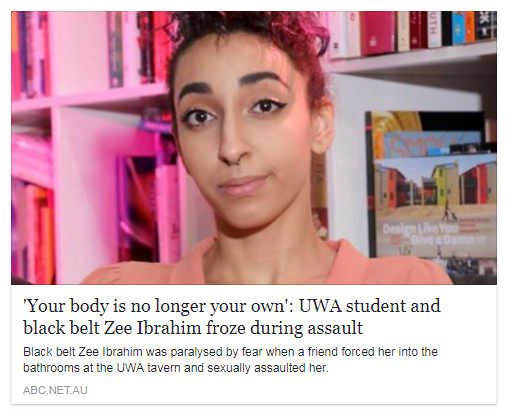 2. Any defence in there?

I've gone over this before, but the author referred to in the "How to Horribly Injure Someone" article is Tim Larkin, founder of "Target Focused Training" (TFT).  And no, there doesn't seem to be any real "defence" to his approach - at least not as I understand that word.

See the video below and try to find an "attack" that Larkin is responding to. I think you'll agree: there just isn't one. His "uke" (partner in the drill) isn't even pretending to be a "zombie attacker" (never mind a realistic attacker); he's just a guy standing there, minding his own business.

Larkin doesn't appear to be teaching "self defence" here - he's teaching attack and only attack.

Compare the above video to that of BJJ practitioner Stephan Kesting below.

I love how Kesting deals with the appropriateness of pre-emptive striking and its legal/ethical pitfalls, then moves onto discussing actual defence skills that deal with incoming attacks effectively (like moving in or out of the line of attack, stifling the shoulders/body etc.).

Kesting's approach is really cognate with everything I was ever taught in traditional civilian defence arts about defence versus "preemptive attack" (remember the phrase "karate ni sente nashi"?).

And his tips about avoiding the "sucker punch" pretty much reflect my own advice (derived from very different arts to Kesting's).

While TFT seems to lack any (or any sufficient) "defence" component, at least it trains you to attack someone, right? Isn't attack the best form of defence?

Leaving aside the limits of "attack as defence" in a modern Western society, I don't think the TFT approach is even good for that. Why not? Because, as you can see from Larkin's video, TFT is all about treating your opponent as "target", not as a live, aggressively resistant and determined attacker.

As I've noted, it's not as if Larkin's partner in the above video even tries to be a "zombie attacker": he just stands there lets Larkin simulate "horrible injuries" to his person. In other words, he acts as if he were an innocent bystander - perhaps one who is unaware of Larkin's intentions (or even Larkin's very existence!).

In this respect, the TFT is really indistinguishable in its pedagogy from hitting a bag or breaking a board. Yes, it is distinguishable in that you learn to aim for particular vulnerable points on the human body. However, you don't actually hit points like that. More importantly, you don't try to do so on someone who is actively resisting you.

As useful (and necessary) as it might be to teach people how to be aggressive and determined in the face of violence - to be as violent as possible themselves, if need be - it is insufficient to base your whole self defence approach on this concept. 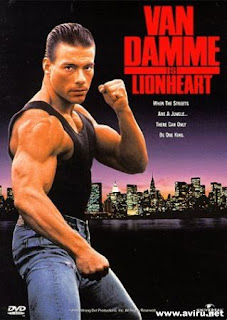 RBSD schools whose primary pedagogy is teaching you "how to horribly injure someone" are not being "real"; they are ignoring:
I can see the lure of the "attack-centric" model of RBSD: it feels empowering when you get to hit things that don't hit back - especially when you're able to act out inflicting "horrible injuries" on your opponent. But there is no reason to see this as anything other than a justice fantasy: one where you get to play the retributive hero in the sort of unlikely scenario usually reserved for a 90s B-grade action movie.

At best, this sort of justice fantasy approach will attract serious legal consequences for unreasonable and unnecessary force (given the fact that the vast majority of us will live out our entire lives without facing the need to inflict "horrible injuries" on anyone). At worst, it will leave you without a skill set for facing the sorts of attacks you are far more likely to face - all while filling you with a false sense of security and confidence.

If you want to function effectively and safely in a society operating under the rule of law, learn appropriate defensive skills - not how to "horribly injure someone on purpose". They aren't the same thing - especially if all your training focuses on non-resistant "targets".