“Grounding” (sometimes called “rooting”) is an essential skill in traditional martial arts and is often associated with the sanchin/sanzhan stance in many schools of karate and particularly external southern Chinese arts. It also features strongly in the internal arts of xingyi and its offshoot yi quan (see my articles “Sanchin in the Chinese martial arts”, “The naming of sanchin” and “Seisan - the universal kata” where I suggest a link between sanchin and xingyi’s “san ti” posture which utilises a stance sometimes called “zhan bu” (battle stance)).

In our school we practise a kind of “standing pushing” exercise in sanchin intended to develop and test grounding. Both partners stand in sanchin at bent elbow range – one hand on the hip, one hand on the shoulder. There are no “rules” other than “no leaning” and “no sudden or pulsating thrusts”. The drill is illustrated in the video below:

So far I've been able to resist such “standing pushing” by far stronger/heavier men in the gym (provided they don't lean in with a significantly larger body mass).

As a matter of interest, I filmed this after I'd lost 18 kg in hospital - yet I was still able to push over larger people without much loss of "grounding" ability. It goes to show how grounding relies on correct technique for momentum transfer, not power (see my article “Hitting harder: physics made easy”).

In this context it is also easy to see how “sanchin pushing” might be assumed to have a “paranormal” element (more on that in a moment). I can assure you it does not.

So how does it work? It relies on efficient posture and lowering your centre of gravity. It is not, of itself, a "combat technique", nor is it just a cheap "parlour trick". Rather it is evidence of good, basic grounding.

I'm not going to start a lengthy physics dissection here (as I did more generally in my article “Hitting harder: physics made easy”). Suffice it to say that good grounding gives you a foundation for generating or receiving any applied force; weak grounding does not. Good grounding involves the correct (optimum) posture to create or receive a push/force etc. That's why leaning isn’t allowed – we are testing each other's stability, not who has the greater mass.

The pushing exercise shown above does not need to be done in sanchin. It can be done in any stance once you acquire sufficient skill. I've found that grounding translates to every other stance. I have the same results in shiko dachi (horse stance) and even natural stance. However grounding is easier to learn in sanchin. Why? Sanchin lets you use the “shime” or pelvic thrust (see my article “Whole lotta shakin’: addendum”) to add a forward and upward moment.

The "shime" is obvious with beginners and becomes more subtle as you gain experience until it is barely discernible. This is just one variable and works in sanchin particularly. 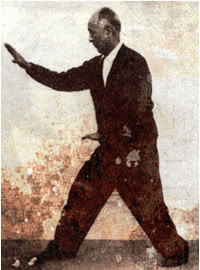 Good grounding is a prerequisite for applying "softer"/"internal-type" techniques (ie. those that focus on the efficient transfer of momentum rather than on power – see my articles “Internal vs. external martial arts”, “Hitting harder: physics made easy” and “Understanding the internal arts”).

Sanchin pushing is one of the "internal" things I do which I could, if I choose, pass off as some kind of “chi”/“ki” because it has people scratching their heads. The biomechanics are not obvious. The fact that I have bent my knees to a particular point and no further, aligned my back and hips in a particular way, performed a subtle "shime" as noted above goes unnoticed to the untrained eye.

It is important to note that in the video Tim is not being "compliant" in letting me push him (except in so far as he isn't "cheating" in this exercise by leaning in). In fact, most of my students try to beat me in this exercise and I encourage it (I even get "challenges" after class - we all know it isn't "combat" but people are, by nature, competitive).

Sometimes the more senior students do beat me (not often!) (in my experience skill in sanchin pushing/grounding correlates with years of training). This is a big difference to many purported “internal” schools of the kind I refer to in my article “Understanding the internal arts” where students let themselves be “thrown” many metres by the mere wave of a hand. As discussed in that article, I do not, for one minute, think this is anything but fake. The students are complicit in their teacher's faking (whether consciously or subconsciously). As it happens, no one I know is in such debt, or holds me in such "awe", that they will fall down when I merely wave my hand!

In this regard, you'll note that Tim doesn't fly away with great speed, only to fall, flailing in agony, on the floor. In this case I was more stable (and able to withstand his "standing push"). Any more grandiose claim than that would be false in my experience and opinion.

And in case there is any doubt, Tim was trying to push hard – except that I’d got the upper hand and he’d lost any base from which to push. The "no leaning rule" also means he couldn't go down to a rugby posture and “salvage” his situation.

In this case I wasn't pushing hard - I had lots to spare; my stance was doing the work. He was attempting to push from a weaker base, so I could use minimal arm force to keep him at bay. With most beginners (even those who are big and heavy) I often don't need to use my arms at all...

If you're very evenly matched with your partner then it is touch and go as to who gets the upper hand – but once someone does, it goes back to the "wall" feeling and you know then that “it's all over, red rover”.