As I said in Creating a kata: Part 1, you create a kata in order to:

1. package and preserve "fragments" of knowledge; or

In terms of the latter 2, this is not an exercise to be entered into lightly. That you are "filling a void" or "improving" something is a big assumption. Nonetheless one can see some obvious examples, eg. with beginner kata; finding newer ways of teaching beginners how to acquire basic coordination and skill quickly is the role of any coach/teacher.

Now here is an interesting example of (I assume) a created kata: 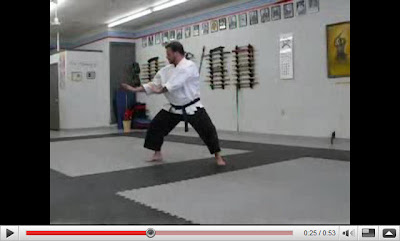 I assume it is "created" recently because in my research I am not aware of any kata corresponding to this name or to this movement. If it is recently created, then I think it actually looks quite good. The real issue for me would be whether it would have any "value adding" benefit to warrant its inclusion in my syllabus. It does not appear to fill any "void" as far as I can see; it does not contain any moves that I feel can't be found in many other karate kata and in particular in some Chinese forms I know. [In the case of the latter, the "new" techniques contained in the created form are, in my humble view, not as sophisticated.]

Again, if this is a recent creation, it is the type of kata I would classify as "recombining" elements of other kata or arguably even "reinventing the wheel". Nor does it appear to preserve "fragments" of knowledge or package tequniques for 2 person practise etc. In other words, it does not appear to be created for a specific renzoku bunkai-like function.

Having said all that, this kata might well embody this gentleman's (or his teacher's) focus in training. It might instil some kind of movement or concept that he or his school values above others. So it might reflect the style of the creator. I'm a strong believer that every teacher - in fact every martial artist - has his/her own style. Labels such as "goju-ryu" have temporal significance but in reality they describe shifting, constantly changing paradigms. The concept of "constancy" is an illusion.

To someone like me who is fascinated by history, there is also a benefit in preserving an earlier form for the sake of academic study; but even this is fraught with difficulty. Who does kururunfa in a way that actually looks like Shinzato's performance in the 1940 video? How did Miyagi do the form? How did it look 10 years earlier? Did it even exist? 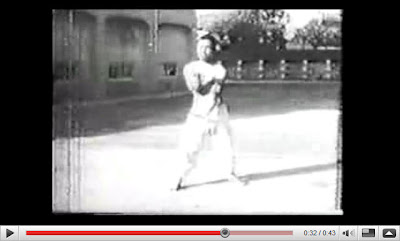 Jin'an Shinzato performing the kata kururunfa in the pre-WW2 documentary "Ryukyuan Things" - click on the image to view the video.

However creating a kata and changing a kata are 2 different things. I agree with my friend Jeff Mann when he recently said on the Traditional Fighting Arts Forum:

"I am concerned about those folks who then conclude that any and all changes are not a big deal. For historical reasons, among others, I want to keep the form as closely to the original as I can. I can't do it perfectly, but hopefully I can do it well. There is value in preserving history as accurately as possible, even if not perfectly."

I don't know whether there really is an "original" but leaving that thorny issue aside, I think we ought to be very careful before we make changes to forms. I recall my teacher showing me a Chinese form and demonstrating some amazingly powerful, simple applications. He then showed me a particular move and said: "No one could tell me what this move meant. This doesn't mean it shouldn't be there. It means we should preserve it intact until such time as we discover what its meaning really was."

Changes made on the basis of insufficient knowledge can be very bad. This kind of thinking produced the ITF "sine wave" after all (more on that below)...

The juroku jo kata I refer to in my article "The 5 elements and the martial arts" is a case in point: I preserved it intact - as did my teacher (I believe via the late aikido master Ken Cottier who in turn was a direct student of Morihei Ueshiba). It was years after I learned it that I discovered that it is a 2 person form where both sides do precisely the same sequence. Had I changed the form in any way I would probably never have realised this.

In other words, changes to kata should only be made when you have sufficient knowledge. However, how were form changes made in the past by so-called "masters" done with "sufficient knowledge?" As my friend Shidokai points out on the Traditional Fighting Arts Forum:

"I can't see how they could have been. As I pointed out earlier, I know of no accounts of Funakoshi or Miyagi ever being in a life or death struggle, or even a minor scuffle. They were by many accounts respected for the fact that they did not get in fights. While this doesn't discount their ability or knowledge, it does indicate that perhaps not all changes made were for the sake of realistic application."

Certainly we can't be sure that masters such as Funakoshi or Miyagi did have "sufficient knowledge" when they made their changes. But we shouldn't rashly assume that they didn't. And the only way we'll know whether they did or not (and what to do about any deficiencies) is to have a sufficient level of knowledge ourselves...

People have sought to improve on Funakoshi. No doubt many things could be improved. I have my own ideas. But "sine wave" (as illustrated above) wasn't one of them! I would go so far as to say that the current emphasis on "sine wave" manifests a misunderstanding of what Funakoshi had right and simultaneously a misunderstanding of what he had that needed "improvement".

A little knowledge is a dangerous thing - sometimes a lot of knowledge is too. You have to have "sufficient" knowledge, and that might mean more than "a lot" when it comes to kata changes or kata invention.

My own forays in this area have been conservative - either 2 person drills/embu of existing techniques or very basic instructional forms. In a couple of cases they have packaged "stray techniques" into a sequence without modifying the individual components. I'm not game to revisit shorin/shotokan forms to "improve" them as I don't think I have the requisite skill to understand their full intent - flawed as it is. I'm not suggesting others do not and will not. There are some whose judgment in this arena I trust, but they are few and far between.

Chen Pan-Ling, the famous martial arts innovator, is well known for his "synthetic" form of taijiquan. He is one of those I am inclined to trust (as have many others, including well known Taiwanese full-contact fighters who were his students, such as the legendary Wang Shujin and Hong Yi Xiang - both strongmen of their era whose streetfights are well documented, as well as their "comparisons" during visits to Japan).

The quote below is taken from Hanshi McCarthy's article on this kata and Aragaki Seisan:

The term Chokyu represents the combination of two separate ideograms: Cho & Kyu: *Cho* represents the alternative pronunciation for the first ideogram of the Japanese/Okinawan surname *Naga*mine (as in Nagamine Shoshin). *Kyu* represents the alternative pronunciation for the first ideogram of the Japanese/Okinawan surname *Miya*gi (as in Miyagi Chojun)... By eliminating the second person (the attacker) in the first part of the drill and then reconstructing the defensive portion of this exercise [a practice I have popularized], I became convinced that it must have been the original source from which Miyagi (& Nagamine) drew upon when developing Gekkisai in 1941. When composing a solo reenactment of the drill that I learned in China, I decided to draw on the same geometrical configuration developed by Miyagi & Nagamine. Drawing heavily on the vigorous stepping & sliding footwork unique to Southern-style Monk Fist quanfa (something I believe that is missing in modern karate), and the vibrant *Yamaneryu-like* body mechanics (something I also see missing in modern karate), I brought together the closed-fisted inside middle block (bridge) and kakewake tsuki (as exampled in Gekkisai #1) with the kake uke and mawashi uke (as exampled in Gekkisai #2) into a single configuration, thereby establishing a modified, and less redundant, version." 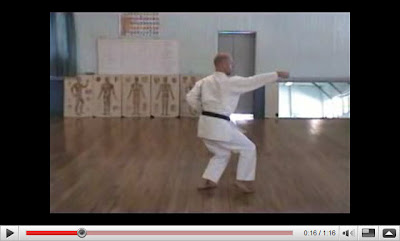 Patrick McCarthy's chokyu gata - click on the image to view the video.

I've said before that my own research has led me in a diametrically opposite direction to the Yamaneryu-like "hip vibration". Were I to design a "research" form of gekisai dai ni, for example, I would not have have moving in a sanchin/hiki uke that is more "internal"(specifically xingyi-like). The movements in sanchin with hiki/kake uke (hooking block) from gekisai dai ni would look something like the moving depicted below:

Note that the momentum is generated by the whole body being thrown into an attack, not by the "double hip". It is for this reason that I would not consider, for example, an attack sequence terminating in a neko ashi dachi (cat stance) as occurs in chokyu gata.

Whose approach is "better"? Am I even remotely qualified to challenge the view of someone who has so many more years experience than I? Perhaps not - he is of my own teacher's "vintage" (they are friends and colleagues). I am certain that there is a great deal to his approach that I do not understand. I'm sure he has a very well-reasoned rationale behind his methodology. It is his "style" (bearing in mind my earlier reference to the concept that every teacher, if not martial artist, has his or her own "style" when you come down to it).

Yet respectful as I am of Hanshi McCarthy's research, my own inclination/style leads me elsewhere... After all, if we agreed on everything we would do precisely the same thing technically and stylistically!

Would my own hypothetical "research kata" based on gekisai be less or more "useful"? Possibly neither. Rather, it would reflect my own way of moving. Presumably a student might choose to study my method because he or she felt my "style" was more akin to their own natural tendencies/preferences, just as another would naturally gravitate to Hanshi McCarthy's way of moving.

And so we come back to the statements I made in relation to "Mizute" at the start of this article. Creating or modifying a kata might be suitable for you, but not necessarily for someone else. Consider the following adaptation of gekisai kata: