Here is the first of a series of extracts taken from my upcoming book "Essential Jo: Comprehensive techniques and combat 2 person drills for the Japanese 4 foot staff".

We call our school “muidokan” or “wu-wei dao guan” – the “house of the way of least resistance”. This reflects both our philosophical and technical emphasis of avoiding unnecessary action by “going with the flow” and using the attacker’s force against him or her.

At the core of our jo method are a series of 20 basic techniques called “suburi”. We have retained these from aikijo (the jo method of the art of aikido) as we find them to be a comprehensive catalogue of the different deflections, strikes and sweeps that one can make using the jo.

Added to this are 9 “kumijo” (literally “an encounter with jos”) – 2 person combat drills that apply the suburi in a dynamic, effective environment. These drills are modeled on traditional kumijo from various schools but are, in the end, my own creation. They are the result of almost 30 years of martial training, combining the features of the arts to which I refer above, and many other armed and unarmed disciplines.

Importantly, unlike many other 2 person drills taught in relation to the jo and other weapons, the drills “loop”: that is to say, they can be practised continuously without end. The practical result of this is that in each drill both sides use the same sequence. The sequences are also short (between 6 to 10 movements), making them easy to learn.

The “looping” nature of these drills is not just a means of facilitating inculcation. Nor is it merely matter of learning/teaching convenience. Rather, each move has been carefully thought through so that it provides the most logical and economic answer to the attack you are facing. The drill then provides your partner with the best answer to your counter. And so it goes. Like the game of “rock, paper, scissors”, these drills cycle through the optimum responses to various attacks, “grooving” effective, reflexive responses which utilize “wu-wei” – the Daoist concept of “no unnecessary action” or the “line of least resistance”.

The 9 kumijo provide what I feel are a comprehensive set of jo skills. It is my experience that when you’ve well and truly inculcated these drills into your reflexive response, you will have an answer to virtually every type and angle of attack.

Add to this the traditional 13 count jo form (which is, in itself, a sophisticated 2 person drill) and the 31 count form (which is an exercise in learning the graceful flow of this weapon) and you have what I believe is both a complete system of civilian defence as well as an elegant art form.

The “usefulness” of jo training

But why the jo? Why should a martial artist be concerned with this weapon when there are so many others one might choose to study?

One answer to this question lies in the nature of the stick – the first and simplest of tools acquired by man – and its primeval connection to our psyche.

In our school we teach students how to handle three lengths of stick, not only for the above reason but because the stick (in whatever form) is probably the most likely object you are going to have on hand in a civilian defence scenario.

Initially we teach the baton (short stick), then the jo (medium stick), then the 6 foot staff (long stick). Of the three I feel the jo length is the most commonly found amongst everyday tools and implements: most brooms, rakes or other gardening implements are approximately the “jo length”. Furthermore the techniques of the jo translate almost as well to a walking cane or umbrella. In short, I feel that the jo is probably the most useful “stick weapon” to learn for civilian defence.

Furthermore, what is so special about the jo is that it combines the best of all worlds in terms of sticks: It is light enough to be wielded with one hand (although this is not where its primary “magic” lies). It can be used like a katana - yet it can also be flipped and used “end to end”. Unlike the 6 foot staff (known as the kon/bo), you can readily use a grip that is biased to one side (where typically Okinawan kon/bo systems tend to use an even grip at the thirds). But like the kon/bo, you can also grip it at the thirds (if circumstances require it). In short, it is a weapon for all occasions.

This is both a blessing and a curse. When you make a mistake, it is apparent for all to see. In sparring you know when you've miscalculated. You just know you're going to “cop it” and there is no escape. On the other hand when you get things right, you can look downright marvelous. Such is the nature of the jo: there are no “in betweens”. It is a hard mistress, but a generous one as well.

Finally there is a very pragmatic reason for any martial artist to train in weapons – in particular the stick variety: the tip of a stick travels much faster than the hand or foot ever can. Accordingly, training with a stick can force your hand/body/eye coordination to experience, and manage, high speed attacks. And if you can deal with fast attacks of this nature, you will be able to manage anything slower far more easily than if did not have this exposure.

The types of jo 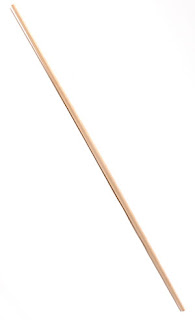 The traditional jo in Japanese martial arts is made of hardwood. Often it is tapered at the ends, however this is not always the case.
My own beloved jo is of the non-tapered variety and is made of Japanese red oak, a comparatively light hardwood. It has withstood 2 decades of bashing and smashing and is still going strong.

For day-to-day use, I highly recommend the Chinese version of this staff – typically made of a type of bamboo called rattan. The advantage of the rattan jo is that it tends not to fail catastrophically after repeated hard contact.
On this subject I will issue this caution: Don’t go out and buy a broomstick from your local hardware shop and bring it to the dojo for practice. While it may well be more conveniently and cheaply acquired than a purpose-made jo, it provides a false (and dangerous) economy. I speak from experience. When I first opened my own dojo I went out and bought a whole pile of pine sticks for my students to use. Midway through the first lesson shards of sharpened pine started whizzing past our heads as the sticks failed in the most spectacular way. But for dumb luck one, of us would have lost an eye. So don’t mess around: buy a proper jo.

Traditional hardwood jos are made of a very dense wood that tends not to break very easily. Sometimes these jos are regularly treated with oil such as linseed to keep the wood supple and less prone to catastrophic failure.

The rattan jo is probably the safest: it doesn’t “break” after repeated impact. Rather it tends to become stringy and limp at the end of its “life”. This is both a benefit and a drawback. If you want a weapon to last a lifetime (or at least a couple of decades as my Japanese red oak jo has) then the rattan jo isn’t going to cut it. A rattan jo will only last a matter of months (assuming regular, frequent training with “stick on stick” impact). 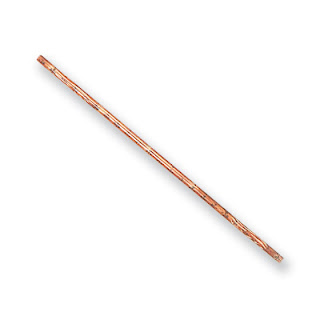 But on the other hand, rattan jos are relatively inexpensive compared to their hardwood alternatives: they can be anywhere up to 10 times cheaper. Just don’t try to treat your rattan jo with linseed or any other oil; I’ve seen people try it and the result isn’t pretty (unless you like a stick that swells like a dead fish).

Rattan jos are also suitably light, something I see as another “winning feature”. Most people I know start with a heavy jo in the mistaken belief that it gives them more “firepower”. In explaining their preference they also cite the fact that they want to develop their arm and hand strength.

On the “power” side, I’ll make this observation based on years of practical experience with the jo and other stick weapons: the speed of your stick provides the major component of the force applied by it – and this speed more than off-sets any lack of weight. Conversely, while a heavy stick might pack a lot of “power”, this is of little use against a faster, more easily manipulated weapon. You’ll simply be “beaten to the punch”.

As for the idea that you should use a heavy jo to build strength, my advice is that your time is far better spent acquiring skill than risking repetitive strain injury with a jo that is too heavy. If you want to build muscle, go to the gym.

In the end it is a matter of taste: I have my old Japanese red oak jo (which I lovingly reserve for solo work and the occasional hard training). For day-to-day use I have a rattan jo. When it wears out, I’ll buy another.

To summarise, I strongly endorse buying a proper, lightweight jo – specifically a rattan one – for reasons of both safety and practicality.