While I'm on the topic of reflexes, I thought I'd deal with one that I've previously alluded to but which I think deserves specific attention, namely the "grip reflex". 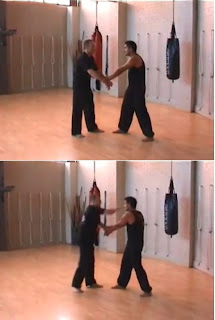 What is the grip reflex? Briefly put, it is the human tendency to "hold on to what you've got" in times of danger or other emergency. The origins of this reflex are easy to understand; when control is of the essence (eg. in climbing, holding or pulling etc.) your capacity to keep a firm and constant grip with your hands is vital.

The problem is that this reflex can also work against you. There are times when letting go of your grip is vital. One such time is in a civilian defence encounter. As one of my colleagues at the Traditional Fighting Arts Forums is fond of saying: “When you are holding your attacker, you have one less hand to hit him with.”

But it gets more complicated than that. You also lose your ability to use that arm for deflecting oncoming attacks. Holding your opponent might mean that you are exerting some control over him/her (eg. by trapping or restraining one of his or her arms), but it also means you are simultaneously restrained in a similar way. Both of you might end up with one limb incapacitated.

Most grappling drills try to set you up so that your restraint of an opponent will put you in a better position than your opponent, but it remains a truism that grabbing someone narrows your options. There is little you can do with a hand that is already holding a grip.

Moreover, the grip reflex can be dangerous. Why should this be so?

Your grip reflex might leave you holding onto your opponent long after you’ve lost control of him or her. There are countless fights on Youtube where a “grabber” is still holding onto his opponent’s shirt while being punched in the face repeatedly. As I’ve said, there is tendency for humans to view a grip on their opponent as an “advantage” - one that should not be lightly relinquished. This becomes particularly evident in a frenzied and confused melee exchange, when you can’t be sure which arm is doing what (either your opponent’s arms or yours!).

I discuss this aspect in the video below:


A video on the grip reflex

As you can see, the simple exercise in the video demonstrates that for a brief moment you can be confused as to what has happened. Although my partner realizes that I’ve broken free of his grasp, he can’t tell (at least, he can’t tell quickly enough) which hand has broken free. And at the same time his body is telling him to “hold onto what he’s got”.

Other issues with grabbing: the need to "relax first, then move"

Even if you have good reaction speed and know when to release a hold, a strong grip means that your arm will be tense. In order to move, you must first relax. This takes time, and in the chaotic world of real combat this is time you might not have.

Don’t get me wrong: there are many instances where grabbing your opponent is important if not necessary. It’s just that grabbing comes at a cost. So how does one ameliorate this cost?

The first step is to restrict grabs only to situations where they are necessary. “But,” I hear you ask, “what if my tactics involve trapping and grappling generally - whether stand-up on ground based?” My answer lies (at least partly) in the friction grip. 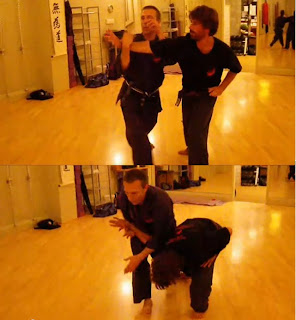 The friction grip is a hold that relies on the friction of skin-to-skin contact to momentarily control an opponent.

Clearly this hold is nowhere near as strong as a full closed-fist grip. However it is often all you need or want. A friction grip can allow you to maintain control for the split second needed for that set-up to counter strike or put on a “permanent” lock/hold.

And it comes without any of the disadvantages of a closed-fist grip, namely that if your friction grip becomes counter-productive, you have no grip reflex to fight, and fewer muscles you need to relax in order to move. Instead, you are free to respond to your opponent’s actions with minimal hinderance.


A video in which I demonstrate arm bars in the “listening hands” drill. Note my use of friction grips rather than full grips.

In short, the friction grip is the grip you have when you’re not “gripping”. In this respect it is rather like a Clayton’s grip, except that it does control your opponent’s limb (albeit briefly). It establishes control for as long as the control is needed, and no more.

Examples of friction grips abound in the traditional martial arts. In fact, they are ubiquitous in Filipino arnis/escrima/kali, karate kata, shaolin forms and the internal arts of xingyi, bagua and taiji (I've certainly encountered them in all the arts taught at the Academy of Traditional Fighting Arts).

Just to give one example, consider the double ko ken (back of wrist) movement in the goju ryu kata sanseiru and suparinpei: many people have interpreted this move to be a physical grab, yet if you look at the shape of the bent wrist you have to conclude that any grip using this posture would be profoundly weak. So what is the explanation of this movement?

One explanation is that it is not a literal grab, but rather a friction grip that uses the hook of the bent wrist to momentarily control your opponent’s attack as you counter (using the back of your other wrist as a striking weapon) - see the video below at around 1:27 onwards:


I demonstrate moves from seiunchin and sanseiru: note my use of the friction grip from around 1:27 onwards.

There are many instances where full grabbing of your opponent is necessary, whether to throw, lock or hold. But full closed-fist grabs come at a hefty price. What you gain, you sacrifice in losing the use of your own hands/arms for any other purpose - partly because of the grip reflex and partly because you will need a microsecond to relax your grip before using your arms for another purpose. 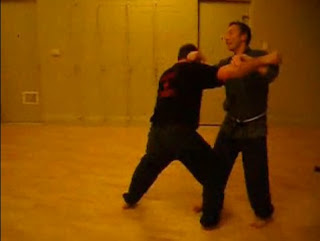 So a good puncher knows that the act of punching will leave an opening to his or her face. The puncher will accordingly throw the punch when that opening is minimized (eg. when he or she is on the outside). Similarly a good grappler will only exert a full of grab once the set-up allows this to be done with relative safety and a level of predictability as to the outcome.

But a good grappler also knows not to commit too strongly or prematurely to any grab. This is where friction grips come into their own. They provide a means of temporary control; a means that is highly variable and can morph into either a full grip or a totally different movement (where the control is abandoned).

The friction grip is accordingly a vital part of any fighter’s arsenal. Traditional martial artists should, in my view, examine their forms/kata to see where such grips occur. If you haven’t done so, try it. You might be surprised at what you find.