November 13, 2012
My last article got me thinking about the whole issue of trust. I see our "illusion of security" as just part and parcel of a greater tendency of human beings to "suspend distrust" in order to function effectively and happily in a society.

The student/teacher relationship is a good example of that suspension. Why do I say this? Because if we accept someone as our teacher, we accept a level of expertise on their behalf. And, as you will recall from my article on mentalism, critical thinking shuts off once an accepted expert begins to speak. Note again the following TED video, particularly at around 3:37 (set to start at that point):

But isn't that a bad thing? After all, aren't we urged from all quarters to "question everything"? Why shouldn't this extend to our teachers?

I was talking about this with my eldest daughter on Sunday as we took our puppy for a run at the park. As I noted, it would be exhausting and extremely inefficient to go through life questioning every single thing our teachers told us.

"You weigh only 1/6 of your Earth weight on the moon."
Yeah right. Prove it!
"The capital of the Czech Republic is Prague."
Sure. Give me some evidence!

In some respects, having to question everything your teacher tells you would be as exhausting and inefficient as consciously negotiating every aspect of climbing stairs (rather than relying on motor learning and kinaesthesia - what I have previously called your "autopilot"). Indeed, you really couldn't call a person you are constantly questioning your "teacher" for the simple reason that you obviously wouldn't trust them enough to give them that title.

But shouldn't we be wary of trusting people? To some extent, yes. But in the end, we have to lower our guard at some point in order to get on with the business of living happily and effectively. Being endlessly distrustful is simply not conducive to this end.

Some years ago my brother made a bad Ebay purchase: I can't recall the details, but the product was unsatisfactory so he returned it (as advised by the vendor). The vendor however never sent a replacement. Since the latter was in Germany there was little my brother could do. Even the Ebay reporting options had passed, my brother having acquiesced to the vendor's entreaties that he not to give him bad feedback as "all would soon be rectified". Afterwards, I remember my brother being philosophical about the whole experience, noting that it wouldn't change his outlook on internet purchases, or indeed, life. "You can't start assuming that everyone is going to cheat you. At some point, you've got to trust someone."

Of course, he was right.

I've noticed that as people age they divide ever more neatly into two categories: those who are cynical and irritable, and those who remain open and cheery. I made a conscious determination years ago to become one of the latter: it seems to me that cynicism is just a subset of resentment. And to quote Malachy McCourt: "Resentment is like taking poison and waiting for the other person to die." 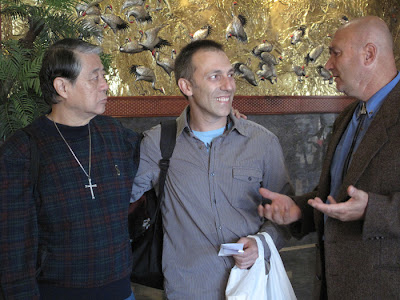 So at some point we must put our trust in others. While we can and should be careful in this regard, we really can't live can't live without giving trust.

This is especially so if we want to learn something. For example, you won't get far with a music teacher if you raise a sceptical eyebrow the moment he or she says something like: "This is a scale." Nor will you progress at university if you scoff at your anthropology lecturer for giving you some facts about the culture of the Dogon people of Mali in West Africa. And so it goes.

Clearly, we all accept people as teachers sooner or later. And, in so doing, we accept their expertise (albeit within certain boundaries). And it follows from the data discussed in that TED video that we will then be less inclined to examine everything they say critically. This is not evidence of the need for a more cynical worldview; it is evidence of just how much responsibility goes with being a teacher - and how reprehensible it is to abuse that position.

I asked my daughter to imagine, just for a moment, how she might feel if she discovered that her current (much admired) school teacher turned out to be a fraud with no qualifications; that most of what she had been learning at school this year was flawed, if not entirely wrong. She admitted it was hard for her even to conceive of such a hypothetical - she had that much trust in her teacher.

Eventually she said that she might feel quite disheartened; that in future she mightn't trust other teachers. And I said that reaction would be perfectly natural. It would be hard for her to put her complete trust in a teacher again. In some respects, she would feel not unlike those people I mentioned in my previous article who, having been the victims of a violent crime, find it hard to feel "safe" again. In both cases an "illusion" has been shattered - one that is necessary for our societal function but that is open to abuse and accordingly deserves our special protection.

So how should we go about making sure we aren't foolishly placing our trust in the wrong teacher? There is no single way. Mostly we make up our mind at the outset that someone seems trustworthy and we take it from there. If, after a period of time, we find ourselves disagreeing with some of the things our teacher is saying, we might re-evaluate the relationship. 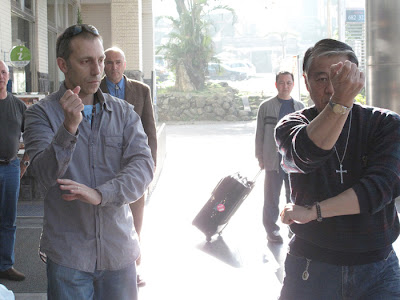 But I believe one of the things we should not do is "test" the teacher via continual requests for "proof". To do so is to violate the teacher/student relationship.

Now, I'm no stranger to hearing doubtful things from a teacher. But I have never sought to "test" any of my teachers. I've either liked it or lumped it.

For example, I recall my sound engineering lecturer telling us: "The floor to ceiling ratio is 90." At first I thought I'd misheard him, so I asked: "Is there another figure that goes with the 90? I'm used to ratios being "X:Y". His response was: "Not this ratio."

What were my choices? I could have scoffed loudly, pointed out his erroneous use of the concept of "ratio" and put him on the spot. Or I could have decided to end my participation in the course as soon as possible. Or I could have remembered his general superlative skill and knowledge relating to sound engineering - whether it be mic technique, mixing, sound file editing, mastering or production - and seen his small error on the theoretical side for what it really was: inconsequential to my trust in him as an expert in his field. So I thanked him and wrote down "Floor to ceiling ratio - 90" in my notes.

For what it's worth, I believe that only other option would have been to discontinue my studies in a polite way. Arguing with my teacher and putting him to proof would have been pointless. If it ever comes to this I feel that you (rightly or wrongly) do not have the requisite trust to call that person "teacher". Hanging around and arguing makes no sense at all.

Over the years I've had a number of students who routinely question practically everything I show them. This is exhausting and takes up valuable class time while I demonstrate and explain in multiple ways. Because I pride myself on approaching my teaching in a logical and scientific way, I don't believe I've ever been found wanting; I've generally always given a good case for my point of view.

But students like this are not easily appeased. For every bit of "proof" you give them, they want more. I've generally found that they are far more trouble than they are worth, as they interrupt the flow of the class and unfairly occupy too much of the teacher's attention. The class suddenly becomes focussed on them and them alone. The teacher has to do backflips to please them and the rest of the students are neglected, if not forgotten. Thankfully, these sorts of trouble-makers generally don't hang around for long.

Don't be this sort of student. 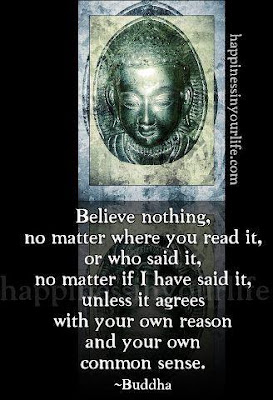 Either be a student or don't be. There is no "in-between". Don't "test" your teacher via continual requests for proof. Even worse, don't "test" him or her via sparring etc. It "proves" nothing. I've had teachers who were very elderly and for whom "sparring days" were long past; this didn't mean they had nothing to teach me. On the contrary. Their lengthy experience was precisely what I wanted to avail myself of. Had I ever felt the need to "test" them in sparring, one would have had to wonder why I still called them my teachers - or, more importantly, why they still had me as a student!

As a point of fact, I would never, ever, in a pink fit, consider "testing" my teacher Chen Yun Ching or my senior James Sumarac. I never considered "testing" my former teacher Bob Davies. If I hadn't had sufficient trust in them, I wouldn't have been their student to begin with.

There is an old saying attributed to Buddha that goes: "Believe nothing, no matter where you read it or who said it, no matter if I have said it, unless it agrees with your own reason and your own common sense." I agree with this - it is a truism: a truism that reminds us not to have blind trust. How do I reconcile it with my preceding remarks? Well in this essay I have not tried to argue in favour of "blind trust", but rather reasonable or, rather reasoned trust. For example, I wouldn't become the student of a person whose words I found "inconsistent with my own reason and common sense". And I certainly wouldn't remain the student of such a person if I discovered down the track that my initial assessment of their worth as a teacher was wrong.

In the case of the latter, I would not leave in a "blaze of parting shots". To do so would be pointless and, assuming their only "crime" was disagreement on technical issues, disrespectful. Leaving on such bad terms and with such a wanton display of disrespect would make me an ass.

Either be someone's student or don't be. Just don't be an ass.