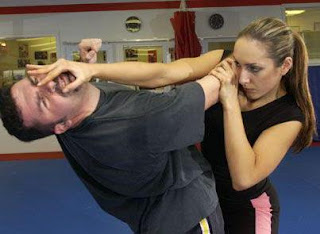 We martial artists spend a lot of time thinking about violence and practising ways of countering it. But underlying our practice is the knowledge, deep inside us all, that we are to some extent living in a world of illusion. We are under an illusion as to our realistic chances of reacting appropriately (if at all) under the pressure of an attack. And, even if we do react appropriately, we are invariably under an illusion as to the adequacy of our defence resources (against attacks which might involve firearms or other deadly weapons, multiple assailants, etc.).

On one view, most of what we practise is going to be of marginal, if any, use in many attack situations. Why? Because serious criminals like to stack the odds in their favour. They don't plan on having a "fair fight". They plan on surprising you and overwhelming you with force and numbers. They don't really want to leave a thing to chance. It is only logical, after all.

So how do we cope with this realisation? For most of us the answer is simply this:
We ignore it.

As a prosecutor I noted that victims of violent crime often have trouble adjusting to life after the event. It can seem to them as if their whole world has collapsed. Whether we are talking a street assault or home invasion, the result is often the same: the victims just don't feel safe anymore. 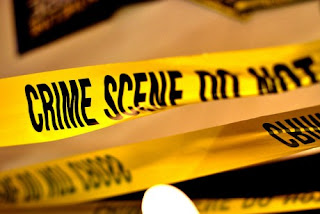 But has anything really changed? Are they really less safe than they were prior to the crime? The answer is invariably "no". All that has changed is their perception of the world. Where once they went about their daily affairs oblivious to the dangers, now they have become hyper-aware of them. They have gone from not being concerned with fears to being consumed by them.

Of course, all of this is perfectly natural, and I don't for one moment wish to be seen as critical of people who have been victims of such tragic circumstances. Their reaction is totally understandable and I am well aware that "there, but for the grace of God, go all of us."

I'm merely pointing out that, largely speaking, we live in a world of "illusion"; one that treats statistically real (albeit small) chances of harm as essentially non-existent. We cocoon ourselves from an indifferent, often cruel, world by using nothing more than a set of assumptions ("I'll never be attacked" or "my home will never be broken into"). When those assumptions are challenged and found to be false, we discover that our whole world can collapse around us. This is because those assumptions underlie almost everything we do: walking to the shops, watching television at night, etc.

I was thinking about this on Saturday when I went up to my brother's place to catch up with Gary, an old buddy from South Africa. We got to speaking about crime in that country (as SA expats tend to do). As Gary noted, most people in South Africa have at least a couple of personal stories about violent crime. 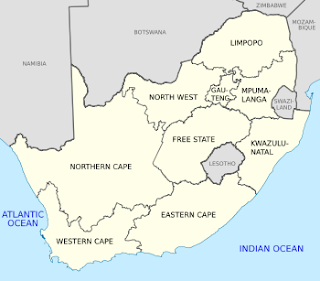 Gary mentioned how he was lucky to have survived two encounters by nothing more than dumb luck. In one case, criminals entering his home through the roof mistakenly dropped a tile which altered him to what was happening. But for that, they would have caught him totally by surprise. And in South Africa most criminals don't just take what you have and go. They kill (or at least maim) you as well - if for no other reason than because they can.

In another case, Gary (who used to keep a firearm tucked into his belt at the back) was surprised by a home invader and went to reach for his gun. The criminal saw his reflex reaction and bolted. This was fortunate because when Gary's hand reached where the gun should have been, it wasn't there; he had taken it out for some reason.

In each case, Gary survived by way of pure "dumb luck". Had the dice fallen another way, he wouldn't have been there on Saturday telling us these stories. And for everyone in South Africa who has such a "fortunate" story, there are many more who don't.

One of Gary's work colleagues once turned up at the office a bit late. He said he'd shot a home invader and killed him. When quizzed about the event, the colleague said, matter-of-factly, that he'd fired two warning shots, and when the criminal continued advancing towards him he had no choice but to shoot him square in the chest. "Don't worry," he said, "my neighbour killed the other two." Lest this seem overly callous, it was worth noting that these same criminals had just slaughtered an entire family two doors down. Given the horrific crime statistics, South African police only required Gary's colleague to fill in a few forms and he was free to go. 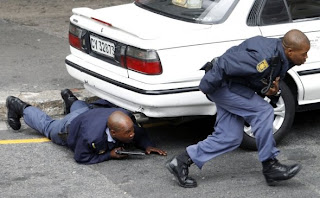 So how do people live in today's South Africa. "Well," said Gary, "it's not all that bad. You get used to it. You're okay if you know what you're doing."

It seems that life in South Africa has settled into a "new normal", albeit one that involves, for wealthier South Africans anyway, a nightly ritual of checking whether the security staff are at their posts, activating the electric fence, arming all the doors and retreating into the "safe zone" for the night (see the ridiculous "house" with the "drawbridge" depicted towards the end of this article). For poorer South Africans life is bound to be a whole lot more uncertain, with lesser safeguards available (and, correspondingly, a higher threshold for the "illusion of safety").

Regardless of your socioeconomic status, during the day you avoid certain areas. You travel by motor vehicle as much as possible. And if you are at all suspicious, you even ignore red lights (many criminals will open the door of a car waiting at an intersection, shoot the occupants, push them out, then drive away). You see, for the criminal there is also a "new normal" - requiring a new modus operandi.

Is it possible to have any "illusions" in such an environment? If not, how is it that people don't become total nervous wrecks?

Well, it seems they just don't. For the overwhelming majority, life goes on. The "new normal" simply replaces the old assumptions with a newer, more cautious, set: If you take certain precautions and you can go about your business as before. You can go to the shops or watch television at night. You replace one illusion with another one that is easier to sustain in your particular environment.

Is this a bad thing? Quite the contrary. It is a testament to the human spirit. Yes, it is a dreadful thing to have to live in a world that is so full of crime and danger. But at the same time, the people in such a society have to be commended for getting on with life; for still having some level of trust (albeit subject to strict caveats) that they will get through the day unscathed; for getting up in the morning and facing each day as if it were "normal". 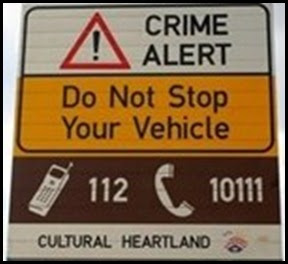 It seems we humans cannot live without some "illusion" of safety. It forms the very foundation of our existence. When we lose that "illusion", we become fearful, resentful and, ultimately, profoundly depressed. As I said to my daughter yesterday, we all require a bit of "illusion" to get on with our lives. Whether we persist in the illusion that we could actually do something to avoid a freeway collision were a car suddenly to swerve into our lane, or whether we persist in the illusion that we are "exempt" from random street attacks or home invasions, the result is the same: we get by in life principally by not thinking about the possibility that these things could happen to us at any time. Yes, that possibility might be statistically small; but it is real nonetheless. It is not "fanciful" or "imaginary".

So what can we do? The best we can do is take those measures that are prudent. In Australia that might mean locking your door and security screen at night. In South Africa it means something altogether more stringent. After that, we will probably assume it isn't going to happen. Why? Because we don't do ourselves any favours by assuming that it will.

People often ask me if martial arts training makes me more confident about defending myself. I am always reluctant to say "yes". The reality is that "defence" seems to cover such a broad spectrum, ranging from some troublesome young man wanting to pick a fight, to a brutal, armed, home invasion. Can I really say that I am confident about my chances of defence in even the mildest of these cases? The answer is no. If you want that kind of certainty, you need to do a lot more than learn martial arts (as any South African will tell you).

So why do martial arts then? For the time being I'll leave aside things like health, fitness, art, fun etc. and focus squarely on defence:

Put simply, martial arts training can form part of the "appropriate precautions" you need to take in order to put the threat of attack out of your mind. Yes, you know it isn't nearly enough to give you any kind of "certainty". But, like locking your front door, it can give you a base level of security. Even if that security is only applicable in relation to something like a sucker punch, it is still valid. And, as I've previously noted, in Australia this is precisely the sort of security you're most likely to need. 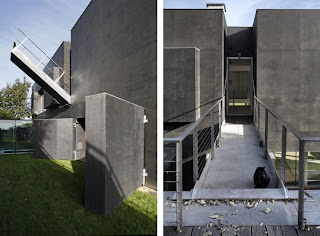 Even if any greater sense of security is, to some extents, illusory, you're still entitled to some measure of it. After all, you can't live without it. Even the South Africans have "illusory security": all that has happened there is that there has been an "arms race" so that their "minimum" is a heck of a lot higher than ours in Australia.

The answer in civilian defence has never been eliminating all risk. However laudable, that objective is not logistically possible. The risk of facing a violent attack is always there, just as you can't remove all risk of accident while driving on the roads (no matter how big your SUV, how well padded it is with airbags and crumple zones etc.).

The best you can do is take whatever measures are reasonable in your particular environment. And after that you can, and should, get on with your life - however "illusory" the certainty of your safety. Because to give in to fear is to cede some victory to your would-be attackers long before they have even tried to strike a blow.