October 29, 2014
Further to my article “The origins of tensho” I came across this video recently.  It shows Lee Kong Sifu demonstrating a white crane form of an unknown name.  The form is the closest I’ve ever seen to the goju kata tensho.

The form is from Fujian white crane.

What is most fascinating to me is that, like tensho, it proceeds with forward steps in sanchin/sanzhan, where the “up, down, side, side” action (which some call “rokkishu” or “fishtail exercise”) is repeated - first with one hand, then with the other, then with both simultaneously.

This is the only time I have ever seen this exact sequence in a Chinese system.  (You'll note from my previous article that the form bafen only performs the sequence with both hands simultaneously - never the hands individually.) 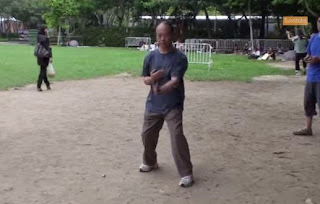 The form then goes on to various finger thrusts that might be counterparts to similar thrusts at the end of tensho, some more palm/hand movements (which have no parallel in tensho), a double handed movement at least partly reminiscent of goju’s mawashi uke and tora guchi, and a finishing sequence (again, not represented in tensho).

Assuming that this form is not a recent creation but is at least partly descended from something similar 100 years ago, it makes me think Chojun Miyagi did indeed at least see such a form during one or both of his visits to Fuzhou in 1915 and 1917.

However if I am right, I think we can conclude that tensho was still largely his own creation (as Miyagi himself appears to have maintained).  This is because even the above, similar-looking, Chinese counterpart to tensho is simply too different to be a direct ancestor.

In short, tensho seems unlikely to be something Miyagi learned entirely or substantially from a Chinese master.  Rather, I suspect Miyagi saw a Fujianese form similar to the one above.  I think he noted the hand movements that corresponded to the familiar "rokkishu" or "fishtail" exercise (apparently taught at the Kojo school).  And I think he noted the "each hand separately, then both hands simultaneously" sequence.

Then he packaged all of this into a new kata - the one we know as "tensho".  That's my best guess anyway.

It's interesting that like the above form, both tensho and Miyagi's version of sanchin involve forward and backward steps, with no turn.  This is unlike other Okinawan sanchin models (eg. Higaonna sanchin or Uechi sanchin).  It is however consistent with sanzhan in ngo cho kun and Yong Chun baihe.  It makes sense of Miyagi's reported obsession with the fact that Higaonna's sanchin didn't have backward stepping: it was inconsistent with what he saw in related arts on the mainland.

So it seems to me that Miyagi did learn (or at least get inspired by) something in China: the "genetic marker" of the stepping and hand movements in the forms he professed to create is still discernible as distinctly Fujianese in origin or, at least, in inspiration...