July 03, 2016
When I first started karate my instructor told a story in class about a student he observed training on his own.  He'd arrived at the dojo during a time when no class was scheduled, gone onto the floor and undergone a 1 1/2 hour training session so disciplined, so focused that my instructor had watched the entire thing, transfixed.

Never once did the student break concentration or pause for a rest: he just kept repeating the same movements, one after the other, so that he went well into, and over, his VO2 max.  Watching himself in the mirror, he'd only move on to another technique once he'd achieved whatever (high) standard he'd set.

At the end, he finished his last technique, moved to "yamae" and remained motionless for a minute, his breathing ragged, his body so drenched with sweat that his gi had become translucent.  Then he bowed. and left the floor.

All without a word.

Over the years I've pondered this anecdote considerably - often wondering whether I had the physical stamina, but more the mental discipline, to train that way.  It seemed an almost unattainable ideal.


I've long admired this video of my friend Mark Cook training solo.
It reminds me of the story my instructor told me all those years ago.

But very recently I have realised that I do, to some extent, already train this way.  In some respects it has become the cornerstone of my personal practice.  I just hadn't noticed.


My training keeps me in whatever shape I'm in - despite aging, injury and a chronic immune illness.  It has kept me in active martial arts training long after I was told by medical experts that I wouldn't be.  Occasionally I even wonder how it is that I can do some of the things that I end up doing.

Sometimes it occurs to me that I am able to do some things I couldn't do when I was much younger and healthier.  This year I turn 50 and I've set myself the goal of doing 15 chin ups and 80 push ups on my birthday.  Achievable?  I think so.  But why am I so confident?  Logic should tell me otherwise, but my intuition (based on experience) does not agree!

The reason I trust my intuition is a mix of focus, determination and gradual, responsible conditioning.

Without realising it, thanks to my training I've now become more focused than I have ever been in my life.  When I'm training I remain in the moment.  I don't give up.  I keep going.  I redo a movement time and time again until I get it right.  I don't care if I am out of breath or dripping with sweat.  I ignore the pounding headaches, the ache in my muscles, my gasping breath and my racing heart rate.  I push on with single-minded determination to my goal.

I think that what lies behind the effectiveness of this mindset is the following:
In case you haven't noticed, I produce a lot of videos.  These aren't carefully planned or rehearsed.  They are filmed ad hoc during or straight after lessons as the mood (and topic) takes me.  When I don't get it right on the night, I usually let it go.  (Often opportunities to record something come and go because, for reasons I'll explain in another article, no two lessons are alike and by the next lesson I might well have moved on, and the moment - and thought - will be gone.)

It's for this reason that I will sometimes stay behind after class to film a technique or form for the sake of completing our students' technical database.  In most cases I won't be "prepared".  I might not have done the particular form for weeks, months or even years.  I might be feeling unwell, sore or be injured,  But I set myself the challenge of filming the technique or form for posterity anyway. 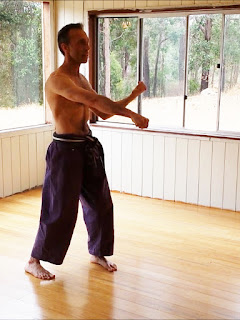 And so (perhaps to the chagrin of the student(s) who are filming) I will keep repeating the form or technique again and again, one after the other, until I get it right.

Those who practise forms will know that after one performance you're usually out of breath.  After two in a row you have exceeded your VO2 max.  After three you're starting to flag.  But I keep going.  If I absolutely need to, I give myself a 10 second break.  After 10 or so performances, I might stop for 30 seconds to view the footage.  Then I'll (foolishly) go back and start again.

Why "foolishly"?  Because the simple fact is that once you're that fatigued, your performance standard invariably drops.  And your chances of making an error increase exponentially.  So why not stop after the first few?  Because I keep searching for that elusive (impossible) "perfect" performance.  I want to get it "right" - as a benchmark  that will serve as a reference for the database.  I want to set an example.  It needn't be the "best" and it needn't be "perfect" (if that is remotely possible) but it must clear my own standard of suitability as a student resource.

This means it must not have sequential or technical errors.  The timing or tempo must be in the ballpark of what is acceptable.  The amount of force generated, and the focus and "finish" must be sufficient to illustrate the point.

It doesn't matter if person X or Y can do it better.  They aren't there for me to film.  There's only me.  So I, with all my limitations, must make do.

The net result is that I always set out (somewhat optimistically) to get it done in one to three takes.  The reality is, judging by the video record, that the average is more like ten to fifteen.  Mostly in a row.


The walking cane form. I think this was Take 15 in a row.  Not what I wanted, but it
will have to do!

I recently refilmed a walking cane form this way after a Saturday class.  A student stayed behind to film.  A few others were watching.  The form is quite athletic - especially for an old guy like me.  The first performance went off the rails as I tried to remember and emphasise all the little details I wanted recorded for posterity.  Juggling mental concepts like this inevitably takes you "out of the zone" so you make one or more tiny mistakes here and there.

So okay, Take 2.  That is nearly perfect - but right at the end I realise I've almost finished and it's all going great!  And that realisation is enough to make me fluff the penultimate move.  On Takes 3 and 4 I'm so out of breath that my performance standard drops significantly: even though I've got through the form more or less without error, I know the result sucks.  It won't do as a reference point for students.  So I take a 20 second breather and start again.  And this time I get it right, but it's too slow and lacking in "oomph".  The two Takes after that are much too fast.  The three Takes after that are slower but lack focus or definition.  The two Takes after that lack force.  In the Takes after that I slip on a pool of sweat or miss a technique.

Somewhere along the way I get through one complete performance.  And it feels so-so.  I pause to check the footage.  And it looks okay.  It clears the bar.  Just.  It ticks the boxes without feeling "great".  It lacks the energy and spontaneity I had at the start, the technical proficiency in individual movements I'd honed in the middle and the flow I'd established somewhere towards the end.  But it works.  Well enough.

By that time I realise that I've been training solidly for an hour.  I'm drenched with sweat. I've been focused on one goal the entire time, trying to stay "in the zone".

When I think about it, I now do all my training - even my "kitchen training" in the same way.  I'm so used to the work ethic of video recording that I now apply it universally.  If I have half an hour at the gym at lunchtime, I am focused for that whole half hour.  If I am leading a class in repetitions I am focused.  I train as if a camera were on me - as if I'm trying to "record it for posterity".  Whether it be my form in push-ups (and the required number) or the performance of a form, or the execution of a throw or projection, I always approach the task the same way: with the goal of "getting it right" - right enough to serve as a point of reference.


I initially filmed this with my own performance being less than stellar.  And received
howls of protest and derision.  I had to re-film it with the right focus and effort - all at some
personal cost due to injury, including a broken hand.  Such is life.

The fact that there is no camera on me most of the time is, of course, irrelevant.  Because the net effect of this work ethic - arrived at after years of footage in and after class - is that I've learned to make the most of very limited periods of time.

Quite subconsciously, I've found myself arriving (more or less) at the point of mental discipline shown to my instructor by that anonymous student all those years ago.

So when it comes to training on your own - or in a class for that matter - my main piece of advice is this: always train as if someone were recording you on video.  It'll keep you on your toes - and in the moment.  There's no better way to attain mental discipline and "zanshin".  There is no better way of making your training really count.