Why are my karate punches more like boxing punches when I hit shields and bags? 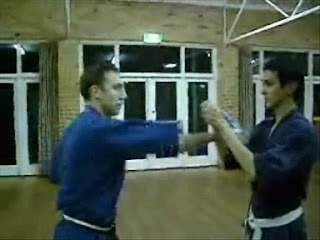 These questions were once put to me by a Shotokan karateka:

"I would just like to ask your opinion. When I use the kick shields, the kick take the same form on the shields as they do in fresh air. However, whenever I use the focus mitts or bag. I seem to use more of a boxing style punch.

By this I mean. jabs, straight right/left, and hooks. Now I know we can call them kizami-zuki, gyaku-zuki and mawashi-zuki. But its the way in which I strike the pad. Using the shoulder, plenty of hip and up on the balls of my feet. Also I breath through my nose. I feel very comfortable in striking this way and I can hit the pads/bags quiet hard.

However, this is contradictory to the way I train and teach karate punches. Shoulders down, using the back muscles. Same hip movement, but heel down pushing to the floor. And breathing through the mouth.

We do have access to makiwara. The Goju-ryu boys use these all the time. I have used one in the past, only for a short while. I do not use one now because I cannot give it the time and commitment it requires."

The longer I train, the more I see that karate and boxing punches are quite the same (accepting of course that they are used with very different tactics). The jab is just a kizami zuki where you retract your punch. Remember that the speed of retracting the arm does not affect the outward speed. 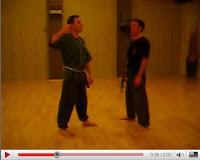 As I've noted in my article "Chambering punches", the "cross" punch is just what I call a "kosa zuki" (ie. a jodan gyaku zuki that starts from a high chambered position and passes through the hypotenuse of the triangle relative to your opponent). Note that the pullback hand can be palm up at the hip or palm down next to the ear or anywhere on an arc between the two positions. While it is arguable that this technique does not exist in karate, it is a very small adjustment to the standard karate punch, moreover it is hinted at in many kata postures and chambers in both karate and its Chinese ancestor arts. 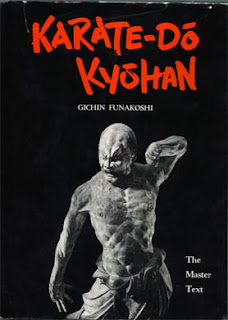 As I have discussed in my article "Visible force vs. applied force", the main difference between karate and boxing is that karate punches concentrate on bare knuckle fighting. This involves more focus kime and less "push" effect/follow through (which is necessary when fighting with gloves). By way of analogy, the difference between boxing and karate is like the difference between being hit with a pillow or being flicked with a wet towel. How you fight depends on what weapons (in this case gloved or bare hands) and blocks (none for boxers) you have to fight with. This is also why boxers keep their gloves close to their face whereas karateka (like the bare knuckle boxers of old) keep their fists well away from their own face in a kamae (guard position) (see my article "The karate 'kamae' or guard".

Keeping your back heel on the floor isolates the punch (ie. it enables you to practice it in isolation). Lifting the heel makes it feel more powerful because you are throwing your whole body in, but it disguises how powerful your punch is alone. If you want to develop your punch, try to get the same effect by not lifting the heel. Remember also that a fully committed punch (body and all) is dangerous unless you land it convincingly. People don't stand there like a punching bag/pad does. Every attack leaves an opening. If you overcommit you leave a bigger and more dangerous opening, and risk overbalancing. In the end it's all a matter of degree. Practice both controlled punches and occasionally go "all out" on the bag for power practice.

There is nothing wrong with breathing through the nose. In fact it is dangerous to get into the habit of breathing out through the mouth on every outward thrust. This not only sets up a rhythm for your opponent but it may mean that you end up unable to punch with full effectiveness mid breath or while inhaling. 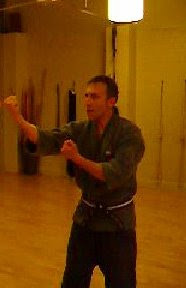 Karate punches should utilise a rounded shoulder (although again, this does not mean turning the body and overcommitting). Punching with square shoulders is, in my view, a result of overemphasis on aesthetics. Think of your shoulder positioning in push ups and you'll see your shoulders are slightly rounded across the upper back. If your shoulders are completely "square" with the body it becomes impossible to do the push up. Chinese 'internal' artists talk about the importance of keeping a rounded "C-back". The Chinese say that not having a a C-back "cuts off the chi". For that matter, think of a good boxer; his/her back is always rounded when his arms are up.

The reason hitting the bag/shield etc with "boxing style" follow through punches feels more powerful is because you have more "push effect" to your punches and hence the results are more visible. Remember that the shields are similar to boxing gloves in that they are hard to focus through. Bare knuckle punches however are focused to create a hydrostatic shock in the opponent. This means that the energy transmitted into the opponent will be used destructively with less wasted on moving or pushing the opponent. If you don gloves it is very difficult to create that hydrostatic shock. You have to resort to punches that necessarily utilise more "push" effect. However these punches are necessarily less economical. Remember that the further your opponent is pushed by your blow, the less your energy was expended on destructive force. As an extreme example, contrast a simple push with the palm of the hand with a focussed slapping blow (kaisho uchi) to the side of the head that doesn't push back the opponent at all - which one is more destructive? Even in boxing the best knockout blows drop an opponent on the spot with a concussive blow rather than knock him across the ring.

The reason makiwara practice is useful is because it trains focus (kime) for bare knuckle fighters, ie. a destructive hydrostatic shock blow. You cannot punch the makiwara effectively if you resort to a pushing/follow through punch. The best makiwara punch hits the makiwara with a resounding thwack, while the makiwara recoils from the punch and snaps back to the knuckles half a second later. You don't necessarily need a makiwara for training punches. Telephone books held an inch or so from a tensed stomach are equally effective. You can tell a focused punch the moment you hit the book. What's more, the punch is exactly the same as the one you use in air punching.

You will see that attempting to jab at a telephone book will, in beginners, produce a very poor effect because most of the energy of the punch is pulled back or reabsorbed into the puncher with the snap back. That's why we start with a basic thrust. Later we practice kizami zuki with a snap back when sufficient focus is developed to impart the energy fully before the punch is retracted. As I said earlier, the retracting speed doesn't help the outward speed. And as for the problem that he might grab you arm, well that's where your Chin-na comes in. In Goju Ryu we certainly use this to our advantage.

There is a reason that kicks and punches are different. Legs are larger and heavier and up to 3 times as powerful as your arms. You simply don't need to develop your focus as keenly on your kicks in order to be effective. What's more, the subtlety in your hand techniques is difficult to duplicate in your lower limbs (that's why we don't all write with our feet). This is why kicks are useful in stopping a charging attacker in his tracks whereas punches are better suited to focused "shock" strikes (think of the slap example above). Lastly, whenever you kick you are compromising your balance in the worst possible way and hence leaving the biggest opening. The fastest possible snap back is essential for beginners. Later they learn thrusting kicks when they have more stability and skill.