Abandoning form: the paradox of the "shrinking" martial art 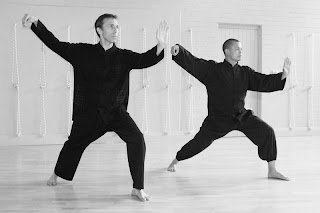 Here's something I was told when I first started training in martial arts:

You start with "no form" - ie. natural movement. However this movement is not necessarily productive and is almost certainly not efficient. You then learn "form"; this involves a basic, formal, structured type of movement being "imposed" upon you. Once you have absorbed or "internalised" this "form" you abandon it - and your movements become natural again.

"Abandoning form" and "shrinking your art" seem to go hand in hand.

By "shrinking your art" I'm referring to making your formal blocks/deflections etc. smaller, using finer and more efficient angles etc. until the basic "form" you were taught becomes almost unrecognisable. The "formality" of your technique (ie. the structure dictated by katas/forms etc.) disappears and in its place is just the smallest movement necessary to effect the principle or essence. These small movements are relaxed and natural in the sense that they no longer resemble the kata techniques. But they are not the "natural" movements that you started with; this time they are productive/efficient.

Basic form, particularly in its blocks or deflections, contains "safety nets"; back up movements or multiple "saves". There are 2 reasons for this: 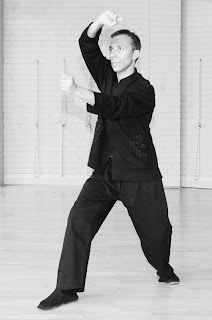 First, basic techniques are compound movements; for example a "block" contains not just one deflection but 2 or more for teaching purposes. In other words, each formal technique teaches you 2 or more principles of movement because of their encyclopaedic value to those who are still in the process of absorbing or "internalising" those principles.

Second, compound movements mean that you have some "back up" in case you fail; these are quite useful to the student still learning to apply the principles taught in the basics. But note that they are "back up" movements only in a very general sense... Every technique has weaknesses and leaves openings. These back up movements don't provide some sort of "failsafe guarantee". At best they give you a small chance of recovering from a stuff-up. That's because most stuff-ups usually mean that you cop it - whether you have a back up technique or not. Moreover, a more experienced student who achieves in one movement what you do with 2 will always "beat you to the punch". The gentleman in the video below makes this perfectly clear.


This video deals with the broader topic of "checking" which I have dealt with elsewhere, but I have used it as an example of the importance of "directness" in combat. Most basic goju karate blocks, for example, contain a back up movement that transfers an attack from one hand to the other - which is great as a safety "buffer" but also takes up a fraction longer to effect. The move is not as "indirect" as the above "check", but the same issue arises at least to some extent.

Once you have absorbed or "internalised" the principles taught in basic, compound movements (ie. they are natural to you, and no longer feel "imposed") you no longer have to rely on formal structure - indeed, as noted above, it is often limiting to try to do so (eg. you shouldn't "force" the use of a formal structure where you might otherwise do a smaller, abbreviated "natural" movement).

Considering the sokumen awase uke in sanseru, it is my view that the technique cannot be described as "lacking" just because, when it used as a simultaneous deflection and counter, it doesn't have a "back up". Rather, the use of the technique in that context indicates that the practitioner is sufficiently advanced so as to have not needed a "back up" of the kind one associates with basic "learning" structures. In other words, his or her timing was sufficiently precise to abandon a more basic, compound form (of which the kata offers many alternative responses, should you need them) - and perform more a direct technique. 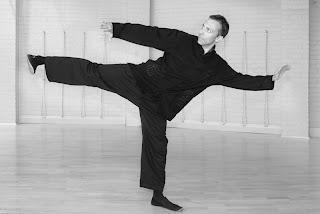 In it's expression as a more "direct" movement, the kata technique might become barely recognisable: In the case of the sokumen awase uke with an elbow strike, all you might see is the practitioner appearing to fall "naturally" into his/her opponent, somehow simultaneously slipping past the opponent's blows and impaling the opponent with an elbow.

Smaller, less formal, yet effective movement seems to me to be an indicator of highly refined timing - and hence of "advancement" in martial arts.

As a matter of interest, my primary karate teacher, Bob Davies, calls his school "wu-shin" - "no form" - for this very reason. This is despite the fact that he teaches plenty of "form". His idea is that every student must strive to absorb or internalise the principles taught/inherent in particular forms. Once this is achieved the student can and should abandon the forms. In other words, the ultimate goal is to have no form at all and just move naturally. Many modern practitioners understand this goal, but don't appreciate the role that formal structures have in enabling you to get to reach it. It seems a paradox, but it is my strong view that to get "no form" you have to start with "form".

In this sense, a jazz musician needs to master scales and other formal structures before being able to abandon them and "just play" with his/her fellow bandmates. Ditto tennis players, who spend hours being coached on formal methods of serving, volleying and baseline play before being competent in free-play (note that tennis is, by comparison to the infinite variables of combat, quite simplistic). Ditto any other skill or discipline...

You need the basics of any skill or discipline as a stepping stone to free expression. Once you have mastered the basics your expression can become free - and you only need to revert during practise to basics from time to time so as to keep your technique "sharp".