Reinventing the wheel: back to the rising block

I find it quite ironic that people are slowly returning to the rising block after decades of disparagement.

I can't remember where, but I recall reading that the Russian military forces have reverted to the traditional rising block which was discovered to be one of the most effective ways to fight against hacking attacks by the Mujahideen armed with long bladed knives.

Others have rediscovered age uke but talk in terms of "punching" - consider the video below: 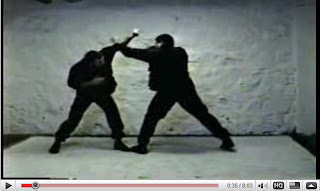 A video showing street fighting defences (click on the picture to access the video). Note the use of the rising block.

Perhaps this is because the block is being used as it was intended: for civilian defence against ungloved opponents (not for sport). Most importantly, the gentleman in the video uses the block as an intercepting technique - meaning that it goes out to meet your opponent, not one that stays close to your head. 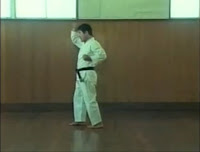 It is my view that this has been lost from traditional karate, where the block is commonly performed very close to the head. Even I was taught this way: "one fist from the forehead". Experience and common sense have taught me that this is not a good idea. I have found it impossible to apply. Indeed, why would you ever want to wait until an attack had practically landed on your face before trying to deflect it? If you do so you allow yourself very little margin for error; the attack will be travelling at its top speed and you will have waited until the last millisecond to deflect it. To me, this misconception of age uke is a prime example of dilution of knowledge in traditional fighting systems (see my article ""Why blocks DO work" for more on this question of dilution). 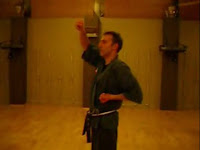 Rather, the rising block needs to extend out so that it can intercept the attack early. If it is too extended it becomes a mere punch; that in itself is not "wrong"; it's just that it leaves you too little margin for error. The further the arm is extended, the smaller the angle left in your forearm for deflection. Given that karate is a civilian defence art, not a sport or military discipline, the emphasis is first and foremost on not being hit, not on hitting.

The only real difference between the basic age uke or rising block and how it is applied in combat is your simultaneous use of body evasion. Just as the video at the outset demonstrates the defender leaning to avoid the attack, a karateka should use taisabaki/tenshin (body movement or evasion) together with every deflection. The fact that deflections/blocks are practised standing still is neither here nor there; this is an isolation exercise for basic practise. Once the movement is correct it should be applied contextually. 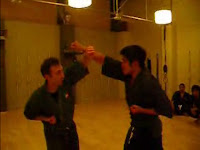 Note however that since karate is a civilian defence art, a premium is placed on not allowing the body to move too far off the centreline; balance must be preserved as much as possible. Accordingly karate uses the age uke / rising block with a step evasion rather (preferably to the side or 45 degrees forwards or back). A small lean might be required, but this will be less than the lean demonstrated in the opening video where the defender does not move from his position. [For more on this topic, see my article "Evasion vs blocking with evasion".]

I have, and will continue to, use the rising block in sparring. If you haven't or cannot I would hazard a guess that you either haven't practised the rising block correctly or you are fighting at an extended range, not the "melee range" of which I often speak.

It seems to me somewhat surprising that people coming back to the age uke / rising block are doing so with the impression that they've found something new ("it's a kind of punch" etc.). I see it as reinventing the wheel. I suppose it doesn't matter if they are reinventing it - the important thing is that they recognise its value.

As I have detailed in my article ""Why blocks DO work", many people in the martial arts today seem to think blocks are functionless. Others say that blocks are not actually "blocks" but are strikes, grappling techniques etc. It is as if the former ride on sleds, remarking on how effective the sled is in snow and ignoring the superiority of wheels on other terrain. The latter (revisionists) think the wheel makes a good frisbee or necklace...

[See also "Is mawashi uke goju's rising block?" and "Two for the price of one: more about karate blocks".]