By design, any drill that is continous (ie. that "loops") must comprise entirely moves that permit continuation. This can be criticised as not allowing the practise of "finishing moves". Indeed this is a valid criticism. However it does not dissuade me from regarding continous 2 person "looping" drills as highly useful training. Rather, it merely suggests to me that they are only part of a well-rounded martial arts regimen. You shouldn't imagine that "looping" drills can replace kata and kata bunkai practise. Instead they add to them. How?

The answer to the above question lies in the closer consideration of "finishing moves": What happens when you attempt such a move and it doesn't pay off? Will you be able to rescue the situation or will you be so committed, both physically (in terms of your momentum) and mentally, that you won't be able to recover?

How do you train to deal with these moments? A big part of my answer lies in our "embu"; our "looping" or continous 2 person forms.

Central to the design of our embu is the principle that no technique is infallible. To me it's a bit like "rock, paper, scissors";1 every technique can be defeated provided it is intercepted early enough. I think that one of the most valuable lessons taught by embu is to drag yourself out of the feeling that your commited counter is going to "finish" things - because it might not; you might find yourself in an "oh sh*t!" moment, requiring some "fancy footwork". You always need to be able to rescue your situation by transferring from your committed counter to another deflection (ie. you might need to "generate"1 another technique to deal with a destructive counter to your own)...

The drill below is acutally for koshi training (hip use). However it also teaches that "simultaneous" techniques are often not infallible; there are times in this drill where you have to be "live" at the end of your punch - ie. you have to be aware of an incoming blow despite having just thrown a blow yourself (the core concept in embu).2


A flowing drill designed for "koshi" (hip) training, but useful in the analysis of "oh sh*t!" moments. 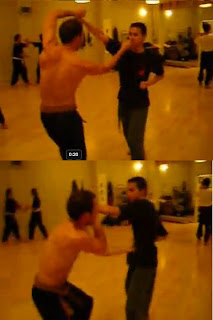 Note how Sam (on the left) does a haiwan nagashi (high sweeping block) with his left hand and hits with his right at about 0:20. However at about 0:21 Sam has to convert his right hand punch into a brushing hand block (te nagashi uke) - to counter Oscar (on the right) who has thrown a left punch (in real life Oscar might have evaded/dodged Sam's right punch and Sam needs to be aware of that possibility occuring).

I think this concept of training for the "oh sh*t!" moment is largely ignored in the martial arts, yet it is crucial. "Looping" 2 person drills like our embu, if designed correctly, can address this issue.

If 2 person drills are designed poorly, are designed so as to be one-sided (ie. non-looping)3 or are too "formal" (eg. the 2 person gekisai drill designed by karate master Toguchi Seikichi, where one person performs gekisai with a high fidelity to the kata sequence while another sequence is matched to fit the kata),4 you miss out on the transition from throwing a blow to suddenly being forced into a recovery.

In other words, our embu training is the antithesis of "finishing blows" for a good reason. It is the other side of the coin. In my view karate training has traditionally spent too much time on "finishing" - and not enough on your recovery from the fact that you haven't been able to "finish".

In the end you need both.

1. See my article "The 5 elements and martial arts" on a discussion of how techniques can "destroy" one another and "generate" others (ie. how they can and should flow into other techniques that negate a destructive force).

2. Nowhere is the core concept of "converting a finishing blow" more evident than in our seiyunchin embu. Note in the single person version below at about 0:20 I throw a right cross - generally regarded as the most powerful punch and usually a "finishing blow".


I demonstrate the single person performance of our seiyunchin embu

However at about 0:21 note that the right cross is quickly converted into an evasion and a low block (dealing with the fact that your opponent has weaved/dodged your right cross and responded with a "low blow"). This is most visible in the video below at 0:26 to 0:27 where Jeremy (on the left) has thrown a right cross which is dodged by Nenad (on the right), forcing Jeremy to convert his punch directly into a "gedan barai" or low sweeping block against Nenad's counter.


Nenad and Jeremy demonstrate the 2 person performance of the seiyunchin embu.

3. A good example of a "one-sided" (ie. non-looping) drill is this excellent renzoku bunkai of the kata sepai, designed by Taira Masaji Sensei of the Jundokan.

Note that while it is an excellent form of training that permits "finishing blows", the drill does not train for the "oh sh*t!" moment. My latter comment should not be taken to diminish the value of Taira Sensei's bunkai - merely to note that, like any other drill, it cannot be the sum of all your training. Rather, like our embu, it is just one facet of training.

4. I had previously used as an example of one of Toguchi's drills (gekisai sho) done by Kimo Wall sensei and Giles Hopkins sensei - you can watch it here. My good friend Jorge Morales-Santo Domingo has since alerted me to this example which is identical sequentially to the version of this drill that I practised for almost 2 decades. It is done exceptionally well - far better than I ever did it:

Despite the outstanding performance of this drill, my comments remain the same: while the drill does have significant benefits, the emphasis that Toguchi placed on fidelity to the kata in terms of actual sequence means that the drill is, to my mind, too formal and ultimately different in body mechanics/movement from free fighting. In this regard it is worth noting that the drill does not contain any real tenshin (body evasion), but rather relies on straightforward stepping as per the kata.

Also the drill does not "loop" per se; there are 2 separate sequences which both reach a conclusion (one side loses). While this design does not, of itself, preclude "oh sh*t!" moments from occuring, it is quite unlike the "constructive" and "destructive" loop to which I refer in my article "The 5 elements and martial arts". That type of "rock, paper, scissors" construct means that each counter will itself be overcome, resulting in a continual, purpose-designed sequence of "oh sh*t!" moments...

As a matter of interest, I have recently completed a revision of our gekisai embu, reducing them from 2 separate drills into one short one containing (I hope) the most salient and useful features of the kata. This is hot on the heels of my revision of our fukyugata embu (see above) a few months ago. I have also used the opportunity in both cases to "value add" by using "internal arts" principles, particularly in the footwork. I will be publishing a video of the gekisai embu soon, along with a detailed explanation in this blog.

And for those who haven't read Jorge's blog "Memories of a Nidan" do yourself a favour and start at the beginning. Jorge is a "writer's writer" - and a karateka's karateka...