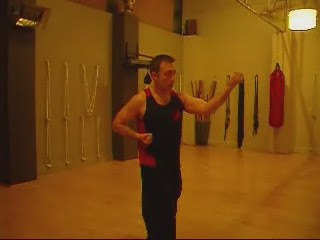 The preceding discussion about the uraken or backfist has made me think about the related issue of where backfists occur in karate kata and what techniques are often substituted.

In fact only one technique is regularly interchanged with the uraken - the age ura zuki or rising inverted punch. How this technique functions and where it is "exchanged" for the uraken in kata, are very interesting questions.


What is an age ura zuki? 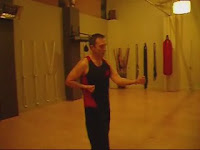 In Japanese an inverted punch is called "ura zuki". This is commonly performed as a low, short-range, horizontal punch, which stops just after your elbow clears your ribcage.

As I discuss in my article "Why corkscrew your punch", the ura zuki is contained in every standard karate punch. In fact the karate punch goes through 3 distinct stages: 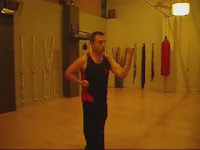 The ura zuki can also be turned into an uppercut (eg. in the kata seiyunchin) however the punch remains strictly for close-range use.

At first glance this might seem somewhat daft as it contradicts the natural tendency to turn over as you extend your arm - the principle underpinning the corkscrew punch. However there is a good reason for not turning over the hand and this relates to your target and the possible approaches to that target.

Punching the throat and chin at mid-range

When you are at mid-range and you want to execute a punch to the throat or chin, you basically have 2 options: 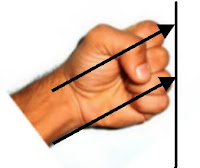 The problem with the vertical fist punch is two-fold. First, whenever you angle a vertical fist punch upwards you run the risk of contacting your target with your smaller, weaker knuckles (as dicussed in my article Punching: alignment and conditioning). As I mention in that article, some arts such as wing chun turn this to their advantage, however I think it is still a risky proposition.

The second problem with the vertical fist is that it presents a wider surface area. This means that it is not always possible to access a narrow region such as the throat.

The age ura zuki solves both these problems. First, it ensures that your 2 big knuckles will strike first, regardless of your exact target. Second, it is narrow enough to target the throat head-on. And if your opponent tucks his chin in, you achieve what is possibly an even more destructive outcome as I will explain:

As I discuss in the video below, targeting the chin with an age ura zuki produces some rather unexpected and, for your opponent, possibly catastrophic results.


I discuss the age ura zuki

While most people think of targeting the chin from below (with an uppercut) or from the side (with a cross punch), a direct frontal attack is not really contemplated. Possibly this is because we are all aware that the chin is a hard target, and struck straight from the front leaves your opponent's head with "nowhere to go".

However when you strike the chin with a straight (as opposed to scooping) punch, but at a slight upward angle (as per the age ura zuki) 2 things happen: 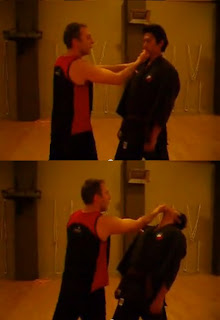 First, your opponent's chin is pushed backwards, as expected. What happens next is however more interesting.

When you push the chin out of alignment with its vertical axis, you break the structural integrity of the body. As I demonstrate in the video, once the head is off the vertical axis, your opponent's ability to resist a force is severely compromised. And this is the "secret" of the age ura zuki: your initial blow will force the head out of alignment - then cause the neck to whiplash backwards with virtually no protection from muscular resistance. Simultaneously, your knuckles target the soft and sensitive under-side of your opponent's chin.

Accordingly, the age ura zuki, if it lands correctly, manages to exploit your opponent's lines of least resistance. It not only attacks the underside of the neck, but it does so at a far more forceful and damaging angle than the uppercut (which runs out of steam soon after it passes the chin mark). Simultaneously (and more importantly) the force of your blow effects a whiplash of your opponent's neck, with potentially significant damage to the brainstem.

Both the ura zuki and uraken present an inverted fist shape, however their similarity does not end there. Certainly if you use your uraken the way I have discussed in my article "Uraken: karate's greatest folly?" you will be striking with the same knuckles - the 2 big ones.

Accordingly I am not surprised that the uraken and age ura zuki are often interchanged in kata. 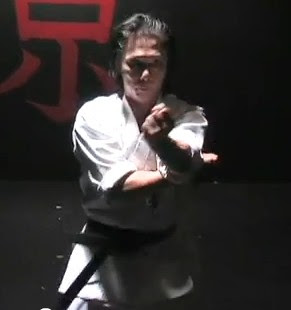 The first, and most obvious, example of such an interchange occurs in the kata naihanchi/naifunchin/tekki. There is a sequence of hand movements in that kata (the same sequence that sometimes features the haiwan nagashi uke) where some schools effect an uraken, while others (including my lineage and that of shorin master Kazumasa Yokoyama - pictured, left) effect an age ura zuki. Which is correct? Arguably they both are. It is possible that the kata designers always intended that the techniques be interchanged, depending on what you wanted to practise at a particular time.

When used with seiyruto uke


I discuss the seiyruto uke or "ox jaw" deflection 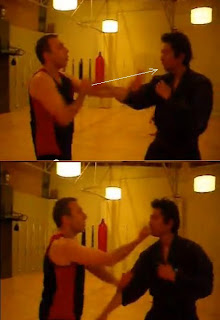 The seiyruto uke is like a palm heel block, however the actual deflection is effected using the corner of your palm heel in a circular motion, outwards and downwards. 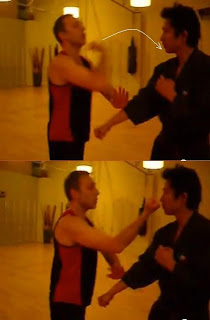 Once again, I suspect that there is no "right or wrong": whether you choose to do an uraken or age ura zuki depends on what you choose to practise.

However it is in the context of the seiyruto uke that the essential difference between the uraken and age ura zuki comes to light:

The age ura zuki is a linear attack, angled upward.

The uraken uch is a circular downward attack. The knuckles might come to rest on the same spot, but the approach is very different.

While it might seem counter-intuitive, the age ura zuki is a deceptively powerful mid-range technique. In order to work, your attacking arm must be low enough to effect an upward angled thrust into the throat or chin.

If your arm is not low enough for an age ura zuki, you can instead effect an uraken with a downwards, circling action.

In other words, your hand position will determine whether the age ura zuki or the uraken is appropriate in the particular circumstances.

Either can be used in kata. In my case, I have been taught to use the uraken in saifa and seiyunchin, and the age ura zuki in naifunchin and kururunfa. What is your preference?