Too often I've heard the lament that clenching your fists causes undue stiffness in the arms. This stiffness is seen as detrimental to martial techniques. After all, most of us know that if you tense a particular muscle it is hard to move it - a situation often likened to "driving a car with the brakes on".

The perceived "stiffness" resulting from clenched fists has resulted in a number of "fixes":

In my own beloved internal arts, there are many who suggest training with absolutely no tension at all in the fist.

Then there are those who suggest (quite rightly) that this is impractical, so they propose a lesser tension in the fist - enough to "hold, but not squash, a fly" being a common example.

Last, there are those who suggest (quite rightly) that this too is impractical (since you will smash your fingers with light tension almost as easily as you will when your hand is not tensed at all). So they suggest that you should tense, but only a fraction of a second before impact. 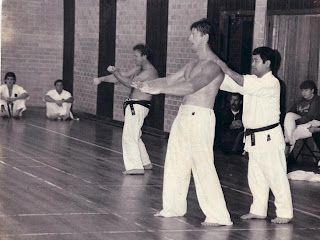 Of course the latter seems like a good idea - until you jam your (loose) fingers against a full power kick (as I have done many times). Indeed, I am often reminded of the sage words of Graham Ravey (chief instructor of the TOGKA and former deshi of Higaonna Morio sensei) that your main reason for making a fist is to stop your fingers being broken - not necessarily for use in punching. In fact, I recall Ravey sensei advising us the one of the most important things in bareknuckle combat was to make sure your fingers were tight - either with your fingers straight and the thumb tightly against the side of a your hand (ie. in a firm "sword hand") or in a fist.

Certainly for beginners I would strongly advise in favour of this tactic. I recall the captain of our rugby team many years ago remonstrating with someone on the beach and pointing a finger at the fellow - who promptly seized the digit and snapped it, causing our captain to miss the rest of the season.

But where does this leave the whole wretched business of having a "stiff arm"? Could it be that it isn't quite the dilemma that it has been cooked up to be? I certainly think so. Consider the following video:

In the above video I demonstrate an uraken - a backfist strike - with a tightened fist. One of my colleagues on the Traditional Fighting Arts Forums maintains that I'm not actually tensing the whole time; that there is an element of "give" in the tension. And indeed there probably is some variation in tension, but I can guarantee that this is minimal.

Others have also pointed out that I probably don't have my fist tensed maximally and this is probably true too. I say that my knuckles are "white" but this is a bit of an overstatement. I say "a bit" because I'm still tensing the fist quite hard; there is definitely no "fly holding" going on here. I'm quite happy to hit something hard with it - at any point in the movement - safe in the knowledge that my fingers won't be shattered.

So what is the trick? Quite simply, there is no "trick". The problem lies with the assumption that a fist can't be sufficiently clenched without causing undue (ie. performance-impeding) stiffness. This is manifestly untrue.

Aikidoka are fond of performing a demonstration they call "the unbendable arm". In this demonstration a person is asked to bend an aikidoka's arm while the aikidoka tenses. The person inevitably bends the arm. Then they try it again, except this time the aikidoka uses what appears to be no tension at all - and the arm becomes "unbendable". Is it "ki" flowing through the arm that stops the bending? No. It might seem that the aikidoka is not tensing, but in fact he/she is tensing. However he/she is tensing only those muscles that are needed to resist the bend. By contrast, when the aikidoka tenses all the muscles in the arm, the resistance becomes impossible because (a) unnecessary muscles are being tensed, causing fatigue while not contributing to the resistance; and (b) some muscles actively involved in bending are being engaged.

A similar process is at work with clenching the fist; if you tense all the muscles in your forearm, you end up with a stiff, board-like arm. However if you tense only those muscles that are necessary for the fist to be protected (or to be used as a weapon) then the wrist needn't be overly "stiff" from functional perspective.1

In other words, the core assumption that "a (sufficiently) tight fist causes (unworkable) arm tension" is fundamentally flawed.

The principle of correct fist tension is one that I teach my beginners from day one. It is a basic. It might take a while before it is mastered, but a passable ability is quickly acquired. I certainly had this ability to a greater extent as a green belt. I had it more or less "right" as a brown belt when I started assisting in teaching.

It astounds me how many martial artists today seem to have skipped this vital (and basic) piece of knowledge, ultimately leading them to rather preposterous (and dangerous) theories to justify fighting with floppy hands. It is true that more advanced students can fight with a more relaxed guard; but it is also worth remembering that it doesn't take much to bend one or more fingers (or toes) the wrong way. [Heaven knows I've done it often enough in my 30 years of training - usually because I was being lazy or overconfident.] And that could well spell the end of your chances in civilian defence. Broken and twisted fingers are hard to fight with.

While I strongly subscribe to the idea that one should move as fluidly as possible, I also acknowledge that some tension will be necessary in various parts of your body and at various times. Indeed, tension is a necessary by-product of movement: it is impossible to move without some element of antagonistic reaction in your muscles. And when it comes down to it, tensing your fists needn't impede your functionality. This issue (along with the myriad "fixes") are, in my view, nothing but a red herring, brought about by dilution in basic, traditional knowledge. 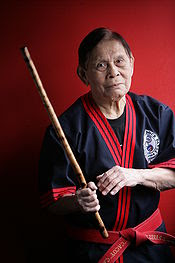 1. Another example of "correct selective tension" is to be found in the Filipino arts of arnis, escrima and kali. I recall noted guro Ciriaco "Cacoy" Canete (founder of Doce Pares) insisting that we twirl the baton with no relaxation of the grip. Up to that point I had assumed that for a full twirl you had to ease your grip at least a little. But Cacoy (then a sprightly 72 year old) proved otherwise, twirling his baton at an unbelievable speed and with a seemingly tight, full-fist grip. "If you don't," he explained, "you will lose your stick on impact". I've never forgotten that lesson, even when succeeding guros have permitted (and even encouraged) me to loosen my grip "for a full twirl".