Recently a fellow sent me an email concerning my article "The karate "kamae" or guard".

In that article I discuss how the old bareknuckle guard and the karate kamae (guard) are basically the same, and for good reason: if you are fighting ungloved, it makes little sense to hold your clenched fists close to your face as having them rammed into can be almost as bad as taking a punch full-on. Rather, with the fists held out at a distance you can not only avoid this problem, but you are also in a position to use what are called "blocks" (better termed "deflections") to intercept an attack closer to its source (rather than when it has almost reached full extension and is travelling at its full speed). 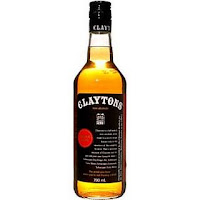 I also described how one of the benefits of the bareknuckle guard is that it incorporates a subtle gem I call the "Clayton's gap". For those who don't know, "Claytons" is a non-alcoholic drink that looks like whiskey and that was marketed extensively in Australia and New Zealand in previous decades as "the drink you have when you're not having a drink". The term has now entered the Australasian lexicon as a general descriptor of something that is fake or flawed.

I use the term "Clayton's gap" in the context of the bareknuckle guard to describe an apparent gap in your defence: a gap that appears to allow your opponent to jab directly at your face with his/her leading arm. In fact, there is no gap. If your opponent tries to throw a straight jab through that gap he/she finds himself redirected at the very last moment.

The illusion of a gap is created because the jab will brush against your leading arm as it heads towards your face, resulting in a slight angle of deflection. Even though the angle is slight, the further the deflected punch travels, the more it is displaced from its original target. In this case, the slight deflection can (and does) result in a sufficient displacement by the time your opponent's jab reaches the distance of your face. In fact, it is only in the last few centimetres that the punch starts to miss, as shown in the video below:


I discuss the "Clayton's gap" and clarify my earlier video

My correspondent expressed grave skepticism about my argument, the whole concept of the karate kamae and my suggested relationship to the bareknuckle boxing guard. 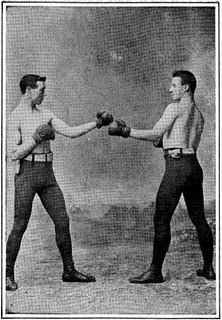 First, he ridiculed my original video by saying that it proves nothing: I had clearly prearranged the attacks and they were being delivered by a very compliant student. Furthermore, the attacks were not realistic. In this context, he lampooned my "continual instruction" of the student about how to punch me. He also noted that the guard was easily overcome by a hook on the outside.

These points would be all well and fine if the purpose of that video was to show a "fighting technique". It was not. I was attempting to show the angle of deflection inherent in the guard and the "Clayton's gap" - not how I would apply the guard in free fighting. In free fighting I would not stand around stiffly, holding my arms out like a statue. I would not expect certain punches nor instruct my opponent how he/she should punch me. But I had to do so in the first video for the purposes of illustrating the vectors and trajectories in a "snapshot" of time. Period.

Which brings me to the next point made by my correspondent: He states that I have completely misunderstood the old bareknuckle guard. As he (rightly) says, old Victorian-era bareknuckle fighters used to circle their arms to confuse their opponents. They didn't stand around stiffly like statues. Accordingly he maintains that in making my argument I have relied upon incorrect assumptions based on static photographs and without regard to how those fighters moved about. 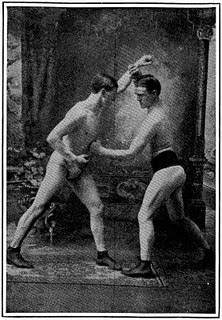 Again, this argument would be valid if I had actually assumed that these old fighters did stand around like statues. I have never assumed that. I was well aware that many moved their arms in a circular fashion. In other words, I never sought to argue that they fought with stiff, unmoving guards, in much the same way as I have never advocated using the karate guard in this fashion. As I've said: my original video was intended to discuss fine angles - not how the guard can/should be applied.

The salient point is this: While some bareknuckle fighters of old did employ a circular motion with their arms, their arms were continually moving through the bareknuckle guard posture - with all the attendant benefits of not having their knuckles rammed into their faces, having the ability to intercept punches early and being able to rely on the "Clayton's gap".

In a similar same way, karateka should not fight with stiff guards. Rather, they should continually move their arms through the guard posture - not in the circular fashion of the old bareknuckle boxers, but naturally in the context of the dynamic melee range environment in which one is punching, deflecting, trapping, grappling etc. And always with an eye on factors such as the "Clayton's gap".

It is important to note that factors such as the "Clayton's gap" are no panacea: they do not provide any kind of guarantee of success. They are just little factors that you might as well use to your advantage. For example, why create a real gap, when you can create an apparent, but non-existent one?

So, with respect to my correspondent, to suggest that my first video purported to advocate standing stiffly like a statue with the arms in the bareknuckle guard misapprehends my point - and sets up a straw man. My correspondent is ultimately guilty of the very thing of which he accused me: he looked at my discussion of a "snapshot" in time and made flawed assumptions based on that. Perhaps this is understandable in the context of my first video, which did not go into detail about the application of the guard in a dynamic environment. If so, I hope this article (and my second video) corrects any such misimpression.

[Thanks to my friend Magpie for the photos of the old-time boxers above.]