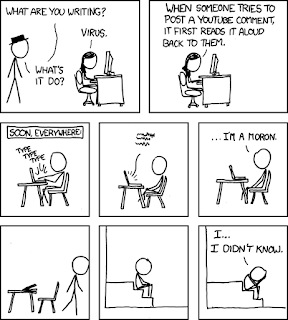 I get lots of comments on the web, some good, some bad, but rarely are they so full of vitriol that they make me react. Mostly I just brush the bad ones off.

A particular "merchant banker" (rhymes with...?) calling himself "12THEANVIL1" decided to post needlessly nasty comments on my bagua montage, and then went over to (of all things) my video about the striking surface of the uraken, voicing his "disgust" at my "lack of internal power" and saying that I "should not be teaching".

Ironically he speaks of "internal power", which I suspect he envisages as some kind of mystical force that is the centerpiece of his delusional belief system. That I wasn't trying to demonstrate power (of any kind) in either of the videos he watched seems to have escaped his pea-brain.

Granted, my technique is not ideal (especially considering my arthritis which had flared up very badly just before this seminar, making me feel like I was walking on broken glass), but it is honest and I don't claim any mastery.

What really gets to me is that people like this are sniveling cowards who hide behind anonymity to hurl insults and abuse.

By contrast I post videos and comments under my real name. And I never say anything I wouldn't say to someone's face. I wonder if he would be prepared to say the same things to my face? I doubt it. And if he were prepared to walk up to a total stranger and hurl abuse, I suspect he would be a very antisocial person unsuited to living in a community.

Some days I can't help but feel despondent with the calibre of many Youtube viewers. Where is their basic civility or human decency? Or does anonymity allow one to behave like a total prick?

I allowed his comment, but I've since banned him and should he find another alter-ego to post under, I'll delete any future comments as I don't think there is any reason to pursue a pointless "debate" with a coward of his ilk.

How does one know that debate will be pointless?

As a Daoist (philosophically speaking) I was quite taken by my colleague Michael's suggestion at the Traditional Fighting Arts Forums as follows:

"I would ask the poster to clarify his criticism in a non-insulting way. Sometimes crassness hides a hidden wisdom. Maybe not in this case, but give him the benefit of the doubt before banning him. Anyway, by asking him questions about his opinions rather then reacting, he will defeat himself (if he is a simple fool) or he will reveal his inner yoda (if he truly has something to say)." 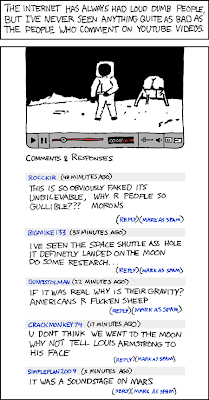 I can see there is a lot of wisdom to this approach. I have refrained from being negative in some cases despite my instinct to do so. I'm glad I didn't respond emotively in those instances, as the poster actually had something to say: I was able to answer him, and the whole thing ended up amicably. Have a look at the comments of Carl Nikolaj on this video:

Carl starts off commenting with what I perceived to be a snide tone, probably because he assumed my video purported things it did not. Initially I was quite perturbed by the tone, but when I stood back and surveyed the situation from his perspective, I could see that the video on its own didn't adequately explain the purpose of the drill depcited. In that situation, it was open for someone like Carl to get the wrong impression of the drill's purpose/function. When I corrected that impression, we were left with a mutually respectful "agree to disagree" position. I'm glad I didn't respond angrily to Carl. Had his assumptions been correct, he would have had a valid point.

On the other hand, some people are clearly itching for a fight and don't have any intention of engaging in a rational debate. I think "12THEANVIL1" is one such person. If someone starts a conversation with vitriolic and petty insults, there is very little chance, in my view, that they have an "inner Yoda" - unless you can see something that might have provoked the person to behave in that way and you can accept that the response was understandable. In the latter case, one should try to diffuse the situation by addressing the intial point of provocation, rather than inflame things further.

In this case "anvil" might as well have randomly started throwing stones at my window and hurling insults about my wife and kids. There was no underlying provocation or misimpression - nothing to explain this behaviour. I'm not going to respond to such unprovoked and random abuse with a question such as: "Please tell me - why do you think my wife and kids are ugly?"

On this subject, there is a saying in Serbian that goes "on piški pod moj prozor" which means "he is pissing beneath my window". Such behaviour is not amenable to rational debate - and should not be dignified by an attempt at rational debate.