August 18, 2014
One of the mysteries of naihanchi dachi is its stance.  I've previously written about this at some length and voiced my own conclusion that it is a variant on "mabu" - the horse stance.

While many karateka would disagree with me, they are at least used to seeing naihanchi performed in a horse stance - ie. the "kiba dachi" (as seen in both Funakoshi's and Motobu's karate).

What surprises many karateka is the discovery that some schools practise naihanchi in the "Naha te" version of horse stance: shiko dachi (known by some as "sumo stance") - where the toes point outwards rather than straight forward or slightly pigeon-toed.

Nor is this a modern innovation: photographs of old-time karateka show both kiba and shiko variations.

So what's going on here?

I think the answer lies in understanding that each variation represents a different tradition within the shorin ryu school of karate: kiba dachi for Shuri te, shiko dachi for Tomari te.

The training stance [of Tomari te] was Shiko-dachi. Students walked around the dojo with a companion on his thighs to strengthen the stance. The kata Naifanchi was executed in this base Shiko-dachi, and not in Kiba-dachi, as in Shorin-ryu. 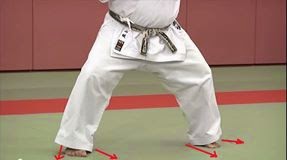 I think this is still evident evident when you look at today's exponents of Tomari te.  Consider the adjacent photo, for example (taken from the video below).

So what accounts for this variation?  What, if any, are the advantages of each option?

Having your toes turn out creates a very stable position when facing a force from the front.  If it weren't so, sumo wrestlers wouldn't use it.  It is by far the most stable posture when facing a forwards push, particularly as it resists sideways twisting (where zenkutsu dachi does not).

Turning a foot out is also quite necessary for many of naihanchi's applications - particularly where the application is about projecting force in one direction as per this taijiquan application (which is often applied - correctly in my view - as the opening move of naihanchi shodan).  [I do note however that if you apply such a "toe out", it will usually put you in zenkutsu dachi, not shiko - so only one foot will be "toe-out".  But I digress.]

By contrast, Shuri te's "toe-in" (or, as I like to think of it, the "outside edge of the foot straight") posture is, in my opinion about a more intrinsic, general structure; it's about grounding against force from multiple directions.

It's also salient to note that the "straight feet" permit rapid sideways movement - ie. they promote mobility along a line (as per the kata performance).  Shiko dachi, on the other hand, is relatively immobile (in any direction) - at the expense of giving you a deeper, lower base (eg. for grappling).

So it depends what you want to emphasise. Many regard naihanchi a "heishugata" - a conditioning form.  Under that view, structure is regarded as more important than application.  Others look at the kata through the lens of specific applications.

And so, how you manifest the form will depend on your perspective.  It seems to me that in old Okinawa there were at least two main perspectives of naihanchi - and this is reflected in the base of the form: its stance.

It has been pointed out to me that that Yamashiro sensei does not, apparently, teach a "toes-out" version, so I stand corrected.

However it seems relatively clear to me that at least some points Yamashiro sensei has one or both feet "toes out" (see below) so I think I can be excused for missing any "inward clawing" that might be going on.  If there is, all I can say is that it is subtle: personally I would regard this stance as more of a shiko variant than a kiba variant. 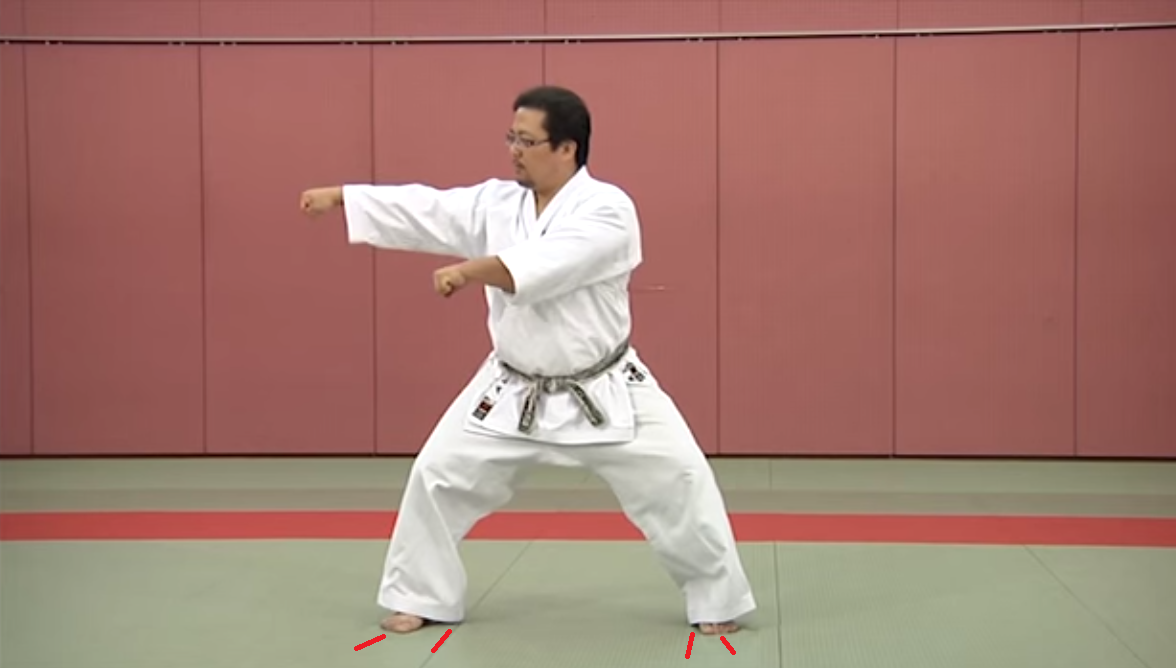 In my opinion, a kiba dachi should be clearly identifiable as toes straight (some people have toes in, but I use "outside edge of foot straight" which gives a slight - almost imperceptible - inward bias). 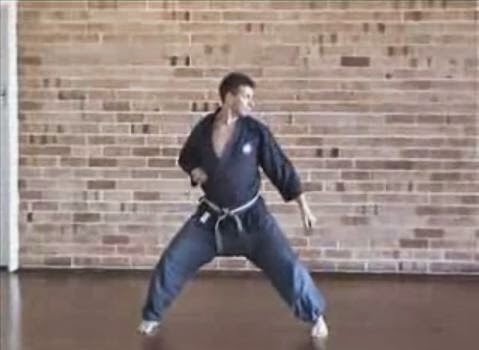