November 05, 2015
My third DVD title "Internalising Karate" is set to be released in the next month.

It provides a detailed discourse into incorporating functional internal arts concepts directly into karate and without recourse to material from the Chinese internal arts. 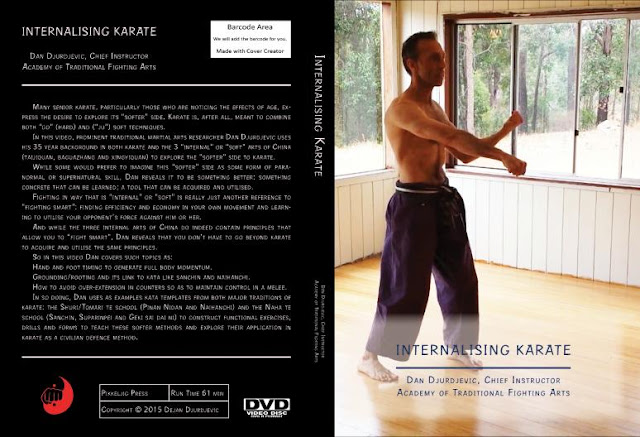 From the back cover:

Many senior karate, particularly those who are noticing the effects of age, express the desire to explore its "softer" side. Karate is, after all, meant to combine both "go" (hard) and ("ju") soft techniques.

In this video, prominent traditional martial arts researcher Dan Djurdjevic uses his 35 year background in both karate and the 3 "internal" or "soft" arts of China (taijiquan, baguazhang and xingyiquan) to explore the "softer" side to karate.

While some would prefer to imagine this "softer" side as some form of paranormal or supernatural skill, Dan reveals it to be something better: something concrete that can be learned; a tool that can be acquired and utilised.

Fighting in way that is "internal" or "soft" is really just another reference to "fighting smart": finding efficiency and economy in your own movement and learning to utilise your opponent's force against him or her.

And while the three internal arts of China do indeed contain principles that allow you to "fight smart", Dan reveals that you don't have to go beyond karate to acquire and utilise the same principles.

So in this video Dan covers such topics as:

Grounding/rooting and its link to kata like sanchin and naihanchi.

How to avoid over-extension in counters so as to maintain control in a melee.

In so doing, Dan uses as examples kata templates from both major traditions of karate: the Shuri/Tomari te school (Pinan Nidan and Naihanchi) and the Naha te school (Sanchin, Suparinpei and Geki sai dai ni) to construct functional exercises, drills and forms to teach these softer methods and explore their application in karate as a civilian defence method.

The DVD will also be available for download (as will all his DVDs - some small technical issues are causing a temporary delay).

Here is an overview of the DVD contents.

Addendum: the DVD is now available both in DVD format and direct download!