November 20, 2015
I noticed my previous article on the overhand corkscrew punch being discussed on Sherdog.

One member there said:


For some reason it rubs me the wrong way whenever someone wants to attach a superfluous name to movements of striking arts. 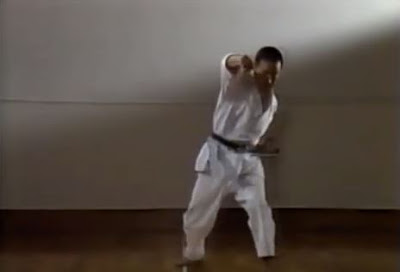 Presumably this is because in the second sentence of the article I said: "In karate I suppose it would be an otoshi ura zuki (an inverted dropping punch)."

I think it is hardly "superfluous" to mention this in relation to karate which, like judo, is remarkably codified - each technique has a name.  Generally speaking karateka of various styles agree on the names (with minor variations).  So just as a judoka knows full well the difference between "o-uchi gari" and "ko-uchi gari", a karateka understands the meaning of "jodan zuki" and "chudan uke".

Since about 70% of my readership appears to comprise karateka, I took the liberty of guessing (note my reference to "I suppose") the correct karate classification of this technique.  I'm sorry if the person thinks categorisation of this sort is "superfluous".  But it is there in the Japanese arts and it is hardly my invention.

Indeed, just as in judo, the terminology functions as an international language.  It's utility is revealed in the number of other arts that borrow karate/judo terms (how many Chinese martial artists have you seen referring to Japanese terms like "kata", "dojo", "dan", etc. and how many MMA fans are familiar with terms like "juji gatame")?  Terminology like this has a long history in all sports - try explaining to a layperson what a "straight cross" is in boxing...

Apart from all of this, I only mentioned my guessed karate categorisation once (hardly reason to be "rubbed the wrong way").

Another member wrote:
Umm... no and no.

First, "uraken" is universally understood to refer to a backfist.

"Uchi" is universally understood to refer to strikes that are not punches/thrusts (the latter being "zuki").

I made it plain that my article concerns neither a backfist nor a roundhouse.  It also did not concern a strike but a punch.  Indeed, it concerned a corkscrewing straight left - just one that corkscrewed even more "right before impact".

So yes, he/she is right that Holm isn't using a "uraken mawashi uchi".  No one said she was.  Yes, she is using another punch.  I couldn't think of the (judo-like) karate classification for it so I had a chat with some fellow black belts and we concluded this was a kind of "ura zuki" (inverted punch).

Except "inverted" usually means twisted the other way (inward, not outward).

When it was suggested to me that "otoshi" (dropping or depressing) would simultaneously describe the downward moment which characterises the punch and remove the possibility of corkscrewing the other way (you can't "drop" a punch twisted inwards, now can you?), I guessed it was properly categorised as "otoshi ura zuki" using the terminology of karate.

If you don't do karate, or don't care about Okinawan/Japanese or other traditional martial terminology and classification, you are free to ignore the second sentence of my previous article and the entirety of this one.  But  I won't be apologising for catering to a large sector of my readership who might be interested in this subject matter.  Nor will I apologise for covering an issue that interests me personally as a teacher and researcher of karate, one who is responsible for syllabus revision and categorisation within our (traditional) school.

Oh, and I won't be apologising for doing karate in the first place - and I won't be modifying it to the point where it becomes unrecognisable - just because of some "cultural cringe" resulting from people who say things like: "Karate... that's funny."


I'm happy doing what I do - thank you very much.  I have my own reasons for training in my particular arts - reasons that might be very different to yours.

If you don't like traditional martial arts at all, that's fine.  The world is a big place and there are many options open to you.  Whichever way it goes, be aware that this is a traditional civilian defence blog and I write about traditional arts like karate that fall within this spectrum and that interest me.  If they don't interest you, very likely my perspective won't either.  You'll be in the wrong place.