November 15, 2015
Okay, so the dust is settling on Ronda Rousey's historic loss to Holly Holm.

And there are no shortage of pundits analysing the details of what went wrong with Rousey's game and what went right with Holm's.

Heck, some people managed to get the commentary right before the fight even started.  Consider this adept video that my friend Gene Burnett put me onto:


Doubtless, writers like the amazing Jack Slack will use this kind of analysis to examine the fight down to the finest technical degree. [Edit: Jack has posted an article - and I'm glad to see his conclusion is consistent with mine!]

But I'm going to be brutally frank here.  I don't think we really need to go to that level of detail to understand what went wrong for Rousey and right for Holm.  I think that in the end it's as simple as this:


All of Rousey's previous opponent have been second rate strikers (compared with Holm). Rousey simply wasn't prepared for a good stand-up game.  She mostly relied on catching her previous stand up opponents off guard in a clinch (which many fighters will foolishly allow to happen - partly because rules like those in boxing mean this is a relatively "safe" zone), moving to a neck grab and hip throw, then an arm bar.  In the case of grapplers, she either beat them at their own game (Rousey is one of the best in that business, after all) or obliterated them with sheer naked aggression (Bethe Correia anyone?). But with Holm, Rousey faced an entirely different opponent: a stand up fighter of the highest skill.

In the end, it was the reverse of watching a stand up fighter get caught by the Gracies in the early 90s.  The Gracies were fond of talking about the floor being their "ocean" where they were "sharks".  Well the melee range is where an excellent stand up fighter like Holly Holm is the shark: this is her "ocean".

It's hardly surprising that the first video analyses after the fight have focused on exactly this: how Holm kept frustrating Rousey's attempts to use her biggest weapon - her grappling - forcing her to rely on her weakest weapon - her striking - all by maximising time in the melee range (where Holm's striking reigns supreme) and minimising time spent in the grappling range (where Rousey's biggest strengths lie). Consider the one below: 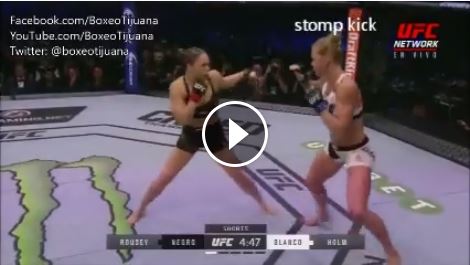 Notice in particular how Holm avoids the clinch - and when she gets into one, exits as soon as possible, keeping Rousey in the melee range where she can dominate with punishing strikes.  As I've said before, it's not about how hard you can hit inert objects - but how you can thwart the other fighter's strikes while responding successfully with your own own.

Holm avoids any kind of grappling entanglement as much as possible - and when she gets caught in such an entanglement, exits as quickly as she can (even if she seems to have a dominant position). She knows Rousey's strength in grappling isn't her attack, but rather her defence in that range: she can turn a situation from bad to good in next to no time. She can "turn the tables".

Well, that's what Holm can do in the stand up arena.

Consider the full fight below: 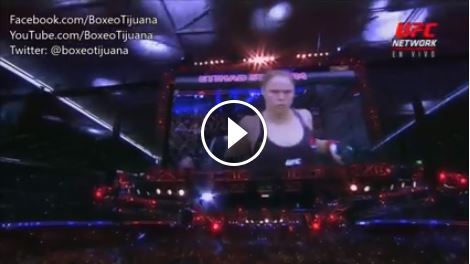 What you'll notice, above all else, is that Rousey has zero counter punching skill (the skill relied upon not only by civilian defence fighters who have gone to the Octagon - like Lyoto Machida - but many famous boxers and other combat sports fighters as well).

Rousey didn't miss Holm because of her own "inaccuracy" - but because Holm was able to avoid her punches.  And she didn't get hit simply because of Holm's "accuracy", but because she couldn't avoid Holm's punches; the latter's superb defence kept Rousey off-guard and off-balance almost the entire fight, making Rousey a sitting duck target.

In summary, as a striker, Rousey is skilled1 simply as an attacker. And this is perfectly fine if your opponent is unskilled at thwarting your attacks.  Holm wasn't, and this was Rousey's undoing.

Take just one example: the colossal missed cross by Rousey (which Holm weaved under, leaving Rousey swinging at air and kneeling, facing the outside of the cage).  In my opinion this showed two things: 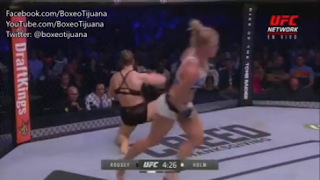 In the end, Rousey got beaten because her stand up game is based on pure aggression - attack - and not much more.

In grappling terms, that's like imagining your opponent is a grappling dummy.  In other words, this is the grappler's version of being told "boards don't hit back".

Rousey disrespected the stand up game and paid the price. If she had applied the same logic and technique to her stand up fighting as she does to her judo, we might have seen a different result.  In judo she understands that she might be caught by an o goshi (large hip throw) and convert that using a defence into her own throw.  But in striking/stand up, Rousey has no such skill.

Holm, by contrast, showed an appreciation of civilian defence grappling - throwing Rousey at one point and frequently off-balancing her without getting trapped in a full grapple in any of the cases.  Indeed, stand up style off-balancing (without full grappling) was Holm's penultimate tactic prior to knocking out Rousey with a roundhouse to the latter's carotid sinus: Holm throws her left straight, forces a total miss with Rousey's own right cross, takes the stumbling Rousey down onto her knees with a push on the back, then kicks her in the neck when she stands up.

If there's a lesson in there for Rousey it is this: in a stand up fight, simple aggression is often enough to win against an unskilled opponent.  And if you're a good grappler, it will certainly give you some good chances to close the gap and use your real skills.  But if you want to fight a good stand up fighter, you need to know enough about stand up defence.

Attacking skills do not define martial skill - rather it's how you manage a skilled attacker that ultimately makes the difference.  This is true in civilian defence, but it is also true in combat sport - particularly when facing an elite opponent.

1. I refer to Rousey being "skilled as a stand up attacker" - but I do so in a very loose sense.  If I were to be brutally honest, I'd say she punches like a beginner.  This gif shows what I mean: anyone with striking experience will immediately understand.  She makes up for her lack of skill in boxing, as many MMA fighters do, with sheer aggression.  Her real, undisputed, skill is in grappling where she is world class.  But in striking, she is far from that.