There is a tendency in some schools of karate today to perform a particular "hip load" on most kata techniques, sometimes known as "Yamaneryu koshi/hip vibration" after a particular school of kobudo which practises this method.

An example of this hip movement in karate can be found in the video below of Aragaki Sochin kata, performed by Aragaki Isumu, a descendent of the Aragaki Seisho and a student of the late Master Higa Yuchoku of Shorinryu:

The level of skill shown by Aragaki Isumu in using his hips is indeed high: many karateka cannot do this despite the fact that an ability to control one's hips is central to the practice of karatedo. I have certainly spent a great deal of time isolating and practising hip movement.

Yet I disagree with the particular direction taken by this school of "hip use". Why? As you might have gathered, my objection isn't to hip use per se, but its use in kata - and in particular its use for each technique. It is, in my view, contextually wrong.

To understand why I feel this way, I first need to say what I think is right with this movement. What is it good for? In short, the hip is being "pre-loaded" for each technique. It is a method of maximising "power", sometimes called the "double hip" method. That this method can produce considerable momentum is ably demonstrated by Peter Consterdine in the video below:

No one is agruing that Peter Consterdine's power generation is impressive: but what is it he is doing? By pre-loading his hip, he is not just punching from where his hip happens to be - he is opening his hip up in order to have more hip movement and hence more momentum with every strike - a bit like someone might throw their arm right back behind their head before a punch. He is loading up as far as he can.

What is impressive in Consterdine's case is that he does it fairly quickly. It is so quick you might be justified in thinking that this is something you can afford to do in every technique - indeed, even during the flow of combat. This is where I completely disagree.

That this "double hip" makes for good momentum transfer is, in some respects, a truism. But is it necessary? For a start, the hip is not the sole source of maximising momentum in a technique, as you will note from Marc "Animal" MacYoung's excellent article “Generating Power”. Hip use is just one of many ways of maximising the 2 principal variables in momentum transfer: mass and velocity. I am of the view that having a good "flow" of movement in combat is far more productive of momentum transfer than any isolated hip movement. After all, you want as much of your body mass as possible moving as fast as possible into your opponent. This requires your body to move in a fluid, seamless manner (think Muhammad Ali's "float like a butterfly, sting like a bee"), not in a disjointed "hip-shaking" fashion.

[For more on the topic of flow, see my article: "The importance of flow".]

And is this double hip even possible in civilian defence cases - or will attempts to apply it cut the flow of your movement? I susbcribe to the latter view.

Certainly one should practise a good hip load for power striking bags, pads, shields (or telephone books). I can do this precise hip movement (and others like it). It is part of hip isolation in basic practice. But should it be done in kata? And if so, in the context of blocks? My response would be a definite "No". 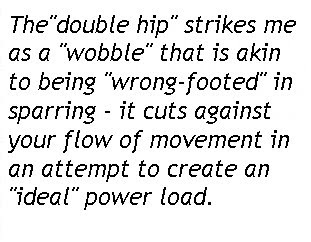 In my view those who have incorporated this move into kata are confusing, on one hand, a static, ideal, environment for striking a stationary object with, on the other, the dynamic environment of combat. To my mind there is no doubt that kata is a method for practising the latter; it is a flow of techniques, not a series of separate, disjointed basics. So while I like what Consterdine is doing (and he has excellent hip use/momentum transfer), I do not think this is an appropriate template for kata practice.

It is for this reason that I think it is very unlikely that you'll ever do a "double hip" in civilian defence cases. Rather your hip should be set up by a previous parry etc. - and you'll go from whatever position your hip happens to be in (rather than some ideal "power" position).

In this respect your hip use is no different from any other "loading" - eg. loading arms for punches and strikes, or legs for kicks. You should learn to move so that you end up in the right (or at least an appropriate) position. You wouldn't artificially load your hip, no more than you would interrupt a flow of movement to load your punch into a chamber. Instead, just as chambers on one arm should take place while the other is in action, so your hip should load during the preceding movement.

Accordingly this "double hip" strikes me as a "wobble" that is akin to being "wrong-footed" in sparring - it cuts against your flow of movement in an attempt to create an "ideal" power load.

Simultaneously it assumes your hip is not already sufficiently loaded for the required technique. Karate is a civilian defence system; ie. it has the central aim of "not getting hit". It is not a sport where you're looking to "win" - perhaps by scoring a "knockout punch". A civilian defence system doesn't try to maximise its power on every single technique. It focuses on safety first.

In the case of the Aragaki sochin kata demonstrated above, the punches from neko ashi dachi are akin to the opening punches in goju's seisan - they are "snap-like" punches - not full hip "power" blows. Any attempt to force them into the "power" mould misconceives their function and robs the student of practising very useful, situation-appropriate self-defence skills (ie. kizami zuki). The fact that neko ashi dachi is not usually seen as a platform for the delivery of power punches (except where it is used to lunge into zenkutsu dachi) is, I feel, supportive of, and consistent with, my argument.

The extent of the hip "pre-loading" in some schools is even more apparent in the video below of Katsuhiko Shinzato performing naifanchi kata. Again, Shinzato is nothing if not highly skilled. But what you will note from this particular video is another significant issue that accompanies pre-loading; every move is being telegraphed...

Again, compare this with our naifunchin, as performed by my brother Nenad:

You will note from Shinzato's naifanchi that the pre-loading of one move can interfere with the power of the subsequent move (much like wave interference can result in cancellation). Consider for example that the "kagi zuki" or hook punch in this naifanchi is, if anything, being pulled back with the hip because of the hip rotation used to augment the previous block...

I also find it most disconcerting that many karateka who practise the "double hip" in their kata have sacrificed disciplined, clean basics (and hence the appropriate "flow" of movement from technique to technique) for "power" - real or perceived. That the basics suffer is clear to me from the fact that many will continue to "shake" long after the strike/block etc. has been completed. This is not only wasteful/uneconomical in terms of energy, but it is also pointless in my opinion (I have many karate and "shaking crane" practitioner friends who disagree with me here!).

One practitoner I know and admire told me that when he went to train with Morio Higaonna, Higaonna admonished him "for using his hips". I think Higaonna was admonishing his pre-loading; ie. his inappropriate or uneconomical use of hips - after all, Higaonna can't be said to lack hip use and power...

I respect my colleague's view and stand to be corrected, but to my taste this line of development is "barking up the wrong tree". I could easily perform my kata with the "pre-loading" method, having a fairly good awareness of my hips and how to use them. Yet I choose not to, nor would I get my students to inculcate this habit. 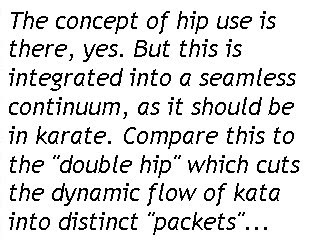 For my purposes it is most pertinent that there are no similar "shaking" movements in the internal arts - which I believe are technically an advancement on the external arts (though not necessarily more effective). The concept of hip use is there, yes. But this is integrated into a seamless continuum, as it should be in karate. Compare this to the "double hip" which cuts the dynamic flow of kata into distinct "packets"... [Again - see my article "The importance of flow" for an explanation (and examples) of exactly what I mean.]

Put another way, the internal arts do load the hip - but generally in, or just before, a parry. The hip then closes and the technique is delivered. There is no "dead" or "disconnected" time. And there is no shaking.

I have some understanding of the "shaking" principle in certain arts. However my view is that all too often it is manifested by "shaking" in the defender's body, when what is intended is a hydrostatic shock imparted to your attacker (see my article "Visible force vs. applied force").

In other words, I think that the "shaking" feeling you might produce in your opponent is often being unnecessarily produced or replicated in your own body... Hydrostatic shock techniques are indeed "internal", but the "external" shaking of the body is not.

To conclude, rather than being a development of karate, I see the "double hip" as an overemphasis (or inappropriate emphasis) of a basic theme. It is tangential at best to advanced technique, not a necessary element.