Do you "purists" for lack of a better term believe that the small minute changes make that much difference? If miyagi stepped here rather than there, had his foot pointed this way rather than that or whatever will actually change the bulk of what the kata was designed to teach?

An interesting question. A lot of people adopt quite a "fundamentalist" view of traditional martial arts, where I think technical deconstruction reveals a great deal of "flexibility" in terms of how particular moves should be performed.

For example in shisochin there is a sequence of 4 moves where you do a gedan barai (downward sweeping block) followed by a teisho uchi (palm heel strike).

In all but one instance (the 3rd) the "teisho" moves are evasive in the sense that you are moving away from an attack, rather than moving in1. In this sense shisochin is quite unusual as most goju kata techniques move into an attack, not away. Even the gekisai kata move into an attack for the most part (consider the opening move which is a forward angled evasion, although the closing moves are clearly "retreating"). For that matter, a similiar technique in taiji - brush knee - reverses the arms and moves into the attack.

So what if you performed all of the 4 shisochin teisho uchi with "retreating" steps? Actually I often do. Why? I like it - it flows better. You can even isolate the sequence into a drill - like the happo one demonstrated below:

Conversely you do a happo comprising 4 "advancing" moves - just as you could change the 3 "retreating" steps I've referred to into "advancing" ones to "rationalise" the kata (on one view it might be considered "more consistent" with advanced gojuryu). 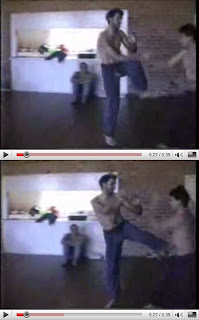 But would I recommend changing the kata formally with respect to the "teisho" sequence? No. Not because of any fundamentalist worship of what I've been taught - but because it is like a classic poem; not "perfect" but thought provoking. I am also aware that I haven't fully understood the intention of the designer nor the applications of the kata techniques.

I see a lot of people changing things and losing some aspect or nuance. Because the change was done rashly, history in that dojo is "rewritten" and knowledge is lost.

So I don't favour changing moves formally. But "changing" them for certain purposes or individuals - indeed, yes.

[The pictures to the above right show Nenad performing the teisho technique in free sparring.]