The enigma of tiger mouth in cat stance

In my article "Xingyi stepping vs. karate stepping" I noted that "after 3 years of blogging I still keep coming across martial principles/methods that I take as self-evident, but of which others might not even be aware". While I'm on this topic, and while I'm on the topic of lessons learned from studying the internal arts (see "You know too many forms"), I thought I'd deal with another topic that I have, for many years, taken as a given - namely the answer to the "engima of tiger mouth in cat stance".

You might well ask: "What is this enigma?" I'll start by explaining that the tiger mouth (tora guchi) is a commonly used technique in Okinawan kata, particularly in the Naha te systems. It usually comes at the end of a mawashi uke (roundhouse block). Sometimes the technique is executed in a sanchin dachi ("sanzhan" in Chinese systems). But more often than not, it occurs in a neko ashi dachi (cat stance). 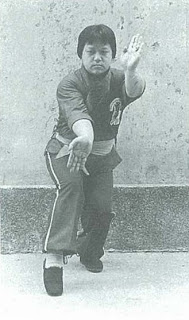 It should be obvious that the tiger mouth technique is either a push or thrust. In that case, the enigma is this:

What possible reason could there be for executing a push or thrust in a back-weighted stance like cat stance?

Convential logic would suggest that this technique should be done in a forward stance, such as zenkutsu dachi ("gong bu" in Chinese). Yet time and time again it occurs in cat stance.

And this isn't something unique to karate either. It occurs in this form in the Chinese systems of ngochokun/wuzuquan (see above right) and the various white crane schools (see the image below left of Martin Watts of Yong Chun baihe). In the case of the latter, the cat stance is not performed with pronounced back-weighting. However the stance is still not a "forward stance" by any stretch. 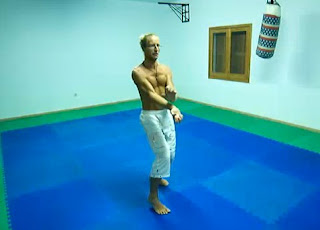 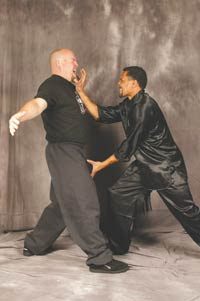 Surely this can't be correct? After all, when you want to push you should step or lunge forward as you do so. If that is the case, why is the tiger mouth push so often executed with the weight held firmly on the back leg?

You will note from the video that it is possible to apply the tiger mouth push while you are lunging forward. In other words, the push is executed when you are at the full lunge position (in forward stance - as per some shaolin schools). However the technique doesn't end there.


A video I made about moving forward into cat stance. Note my analysis at 4:00 onwards.

What happens after the lunge is most interesting. Instead of remaining in the fully extended forward stance, you slide your back leg up so that you end the movement in a cat stance.

Why would you ever do this? For the simple reason that you never want to pause in such a fully extended position as in a lunging push; you need the ability to recover in case your technique misses or is otherwise thwarted. Pulling your back leg up into cat stance means that you can the retreat at short notice; you are no longer fully committed to a forward attack.

But why not simply retreat after the initial push? Why is it necessary to slide up into cat stance? The answer is really quite simple: your momentum is already moving forwards. Accordingly the "slide up" occurs as part of the initial push. Any "retreat" would involve reversing momentum, which takes time. Accordingly, you have no real choice but to slide up into cat stance if you want to recover your posture and balance. This then gives you the option of moving forward or moving backward, as the case requires.

Which brings me to the last part of the enigma: why isn't this enacted in karate kata (and its counterpart forms in China)? Why instead is the move typically finished in a standing position - without any movement at all?

I suppose there are 2 possible answers. One is that the tiger mouth in cat stance is a kind of "code"; ie. when you see this technique the lunge is implied rather than seen. Put another way, the technique is "hidden". This might not be as far-fetched as some people think. After all, cat stance is synonymous with potential energy; your whole body is coiled up like a spring, waiting to be uncoiled. This explanation might also account for why the tiger mouth is often executed as a slow push, with dynamic tension; the practitioner imagines lunging forward with his or her whole body, uncoiling all that potential energy.

Given that karateka so often speak of "hidden techniques", why would this not be a prime example of such a thing?

The other explanation is that it is a dilution: the movement started out as a lunge, but was progressively shortened until the real meaning was lost. All that remained was the finishing position, deprived of any context.

I don't really favour the second explanation, but it is possible.

Perhaps the answer lies in a fusion of the 2: it started out as the finishing position after a lunging push, but was shortened by someone in an attempt to "hide" the real application. This hidden knowledge was not passed on, and so the "hidden knowledge" was lost.

But all this makes me wonder: does anyone still execute a tiger mouth in the manner I have suggested - ie. with a full lunge, finishing in a cat stance? Yes, this is precisely how the technique is performed in the internal arts, specifically in xingyi. Note the following video of my first instructor's teacher, Hong Yi Xiang and his students, peforming tiger mouth. You will see that the technique is peformed identically to how I suggest it should be.


Hong Yi Xiang and his students demonstrating the tiger mouth push. Note how they move forward into cat stance after the push.

I think this is a rather graphic illustration of the importance of "looking beyond one's garden walls" in order to truly understand one's base art!

A colleague on the Traditional Fighting Arts Forums has also alerted me to the use of tiger mouth with an advancing cat stance in the Matsubayashi version of the kata chatan yara no kusanku. A few other styles (eg. some schools of isshin ryu) also perform the technique in a forward stance (zenkutsu dachi). However it seems to me that these are exceptions, rather than the rule. It also fails to explain just why so many karate and Hakka systems feature (usually at the end) a tiger mouth in cat stance. Understanding why this is and what this means has been the purpose of this article.