The power of defence 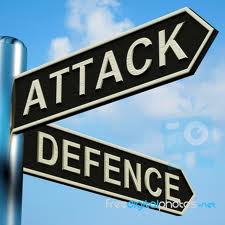 We’ve all heard the refrain: “Attack is the best form of defence.”  It is so axiomatic that we almost daren’t question it.  And yet in this article that is precisely what I propose to do.  In fact, I will go further to demonstrate that the true measure of martial skill lies not in one’s skill in attack - but in one’s mastery of defence.

First let me dispose of the inevitable:

The safest assumption you can make is that “pre-emptive attack” and “avoidance” are both unavailable.  What then?  In that case, the “best form of defence” is, very simply... defence - ie. defence in the form of interception and/or evasion of attacks. 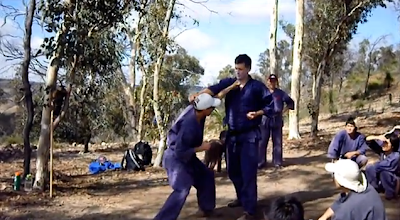 Put in a more traditional way, you need to know how to receive attacks; ie. respond to them in a way that negates or minimises their harm and sets you up to counter, escape or otherwise establish control of the situation.

First, as I’ve noted before, combatants in the cage and battlefield are both faced with very different tasks:
In neither case is the combatant’s primary task to “remain safe”.  Yet the latter is precisely the civilian defender’s primary “task”.

On the battlefield, a soldier is expendable: if he/she dies, another will take his/her place.  A soldier’s task is to do what is ordered in the course of defeating the enemy.  Military priority doesn’t lie with an individual soldier’s safety; rather it is the victory of the entire “machine” to which the soldier belongs.  Soldiers don’t get engaged to “hide” or otherwise avoid conflict.  They are expected to go into the fray - even when it is very likely that they will be killed or at least seriously wounded. 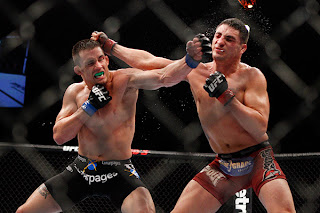 As to combat sports fighters, even if aren’t nearly as “expendable”, it should be obvious why they too often fail to prioritise defensive skills, preferring instead to take risks in order to win a particular bout:

Combat sports fighters are under enormous pressure to provide “entertainment”: no one really wants to pay good money to watch a fight where two fighters circle each other cautiously with almost no punches, kicks or other attacks being thrown.

Indeed, more conservative MMA fighters (eg. Lyoto Machida in his early career) have been prone to criticism by fight fans for “unsatisfying” performances.  Similarly, cautious tactics in many other combat sports have attracted their fair share of criticism, despite their utility.  An early example of "conservative" boxing is “The Method” - a style pioneered by Australian Ambrose Palmer.  This involved the almost exclusive use of the lead arm (ie. very little use of the reverse arm).1

Such conservative tactics remain rare in combat sports.  And it is easy to understand why.  In the end, fighters get paid to fight - not “avoid” fighting.  They get paid to “take the fight to their opponent” - to take risks.  To this extent, combat sports fighters are “expendable”: ensuring their own safety isn’t their primary task/goal. 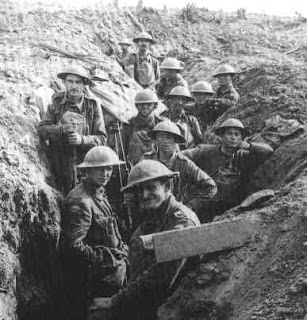 The second thing I will observe is that both on the battlefield and in the cage, defensive tactics manifestly do work.

Sure, Hitler showed how his Blitzkrieg method was initially effective against his opponents in Poland etc.  But this was analogous to an overwhelming pre-emptive strike.  He wasn’t exactly able to continue with his Blitzkrieg methodology once the Allied forces started fighting back.  Indeed, historians will observe that many of his “attack as defence” tactics (eg. the “Battle of the Bulge”) helped foreshorten the war (thankfully!).  Had Hitler adopted more cautious, defensive tactics, the war might have dragged on much, much longer.

Indeed, to understand the “power of defence” one need only look at World War I and note how both sides realised the utility of adopting the highly defensive tactic of trench warfare.  Both sides wouldn’t have adopted it were it not effective.

More relevantly, if you look at any of the most famous, decorated war veterans (whether it be on the battlefield, on the seas, or in the air) the most distinctive feature is not that they took risks.

It is that they survived.

As author Marina Lewycka famously noted, in the end the true measure of victory lies not in acts of valour but in the mere fact of survival.

Take a good look at fighter pilot aces from both World Wars and you’ll see the same theme: survival.  Yes, they racked up the most “kills”: but that is because they weren’t getting killed.  The longer they survived, the better they got at surviving (as well as killing others).  In the end, I believe it wasn’t their offensive skill that made them “aces” - it was their skill in not being shot down. 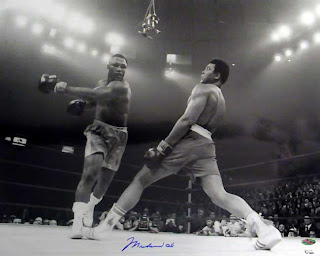 In the sports arena it is also manifestly true that defensive skill defines a true champion.2

As a younger man I was an avid fan of boxing.  I followed all the fighters, I knew all their stats.  One thing I noticed is that you could generally always fit boxers into two categories: brawlers and tacticians.  The former were aggressive, powerful fighters who “steamrolled” their opponents.  The latter were cautious and technical, relying on skill rather than brute force.  Guess who “prevailed” in the long run?

It is easy to say that the skilled fighters prevailed because they had “better attacking ability”.  Fighters like Mike Tyson have often been pressed into this mould.  But I can’t help but notice however that this sort of classification is misconceived.  To me, Tyson was effective at his peak precisely because of his defensive skill - not because he was “the most powerful” or “most aggressive”.  Yes, he was powerful and aggressive.  But so were many other fighters.  What distinguished Tyson was that he was also an excellent defender.

Being an excellent “striker” (eg. of inanimate objects) only gets you so far.  It might well be a prerequisite to being a top combat sports fighter - but it isn’t sufficient.  To be effective, you need to be able to land your strikes despite the fact that your opponent is doing his/her best to strike you.

If you look at any true master of a fighting system - sport combat or otherwise - I believe you find the same thing: powerful, fast and aggressive fighters are dime a dozen.  Those who are also good defence?  Not so much.

Consider for a moment the video above of 10th dan judo master Kyuzo Mifune.  You’ll notice that even though he is older, weaker, slower and less agile than his challengers, he defeats them - with style!  Why?  Because he has mastered defence.  He cannot be thrown.  This means he “survives” until an opportunity for his own throw is presented.

In the same way - indeed, with an even greater level of importance - defensive skill is the true measure of mastery of civilian defence.  Yes, every fighter needs to be able to attack - ie. to be able to hit hard, hit fast and with the requisite aggression / lack of hesitation.

However I have noted before that a philosophy of "Attack, attack, attack!" only gets you so far.  It gets most people over the hurdle of their own kindness and lack of aggression.  This is necessary for anyone wishing to deal effectively with physical violence that cannot be avoided.  But it is only the very beginning. 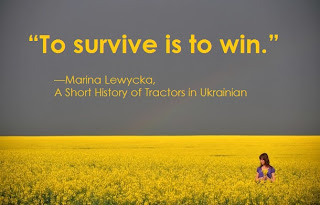 I have previously mentioned my disdain for such things as the "target focused" schools/systems for this reason; they are peddling very basic information, packaged as something "profound" and "advanced".  It is nothing of the sort.

It is akin to World War I generals ordering their troops out of the trenches into another pointless death charge.  It is part of the blinkered, misguided belief that all that really distinguishes a "winner" from a "loser" is aggression and courage.

Yes, you need aggression and courage.  But if you want to master the martial arts, your ability to attack won’t distinguish you.  You’ll just be one of many “brawlers”.  To be a true master you also need to be able defend yourself against attacks.  You need to be able to survive the attacks of others.

Because, in the end, whatever the arena, “to survive is to win”.3

1. “The Method” was a conservative tactic that worked well for Ambrose Palmer and a few select Australian boxers, like Johnny Famechon, who followed in his footsteps.

2. I think it is precisely the defensive skill of middleweight MMA fighter Anderson Silva that kept him at the top (and undefeated) for so long.  He was so good at "not being hit" that he started taking chances - taunting opponents to attack, relying on his superb defensive ability to evade, and take advantage of the openings created by, the attack.

As good as Silva is/was, he wasn't good enough in his recent fight with Chris Weidman.  I think this shows that "letting your opponent take the first shot" is never a good idea - even if you are so good that you can usually pull it off as a tactical ploy!

3. This is actually a rewrite of an article I had scheduled for publication on this blog.  I went in to replace a photograph and make some other minor changes, then tried the “undo” function on one of these changes.  My bad: Blogger decided to erase (without trace) my entire article, just because I was happened to be using Internet Explorer (for whatever reason, Blogger and IE stopped cooperating exactly midway through my edit - and haven't "reopened dialogue" since).

Let's just say that I wasn't exactly in a "defensive" kind of mood for a while!  Oh well - I've rewritten the article now.  Yes, it is different, but probably no better or worse than it was before.  In the end, the article survived (at least, conceptually) which, according to Marina Lewycka's book "A short history of tractors in Ukrainian", means that I've "won".  Take that Microsoft and Google!