Here's another taiji qin-na application I thought I'd share with you: the opening move of "repulse monkey".

Let's go through the technique first: 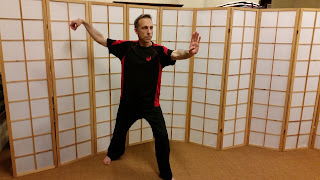 Again, you start in the finishing posture of single whip. 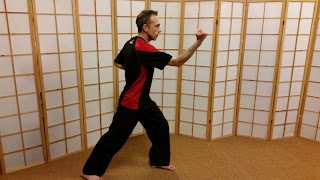 Pivoting on the left (front) heel, you rotate counter-clockwise and execute an inward forearm "blocking" motion with your right (reverse) arm. 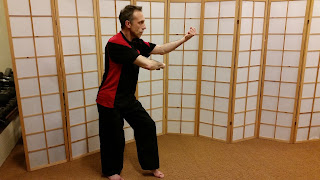 The left arm continues to "fold in" and down (performing a kind of "suppressing" motion) while your right hand rises in a punch very much like the rising inverted punch of karate (especially in naihanchi kata), also seen in zuan quan in xingyi.  As you do this, you draw your weight back into cat stance. 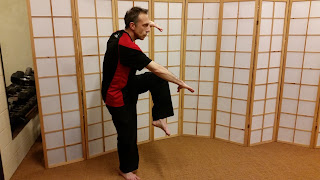 From there you you ward off an advance into your personal space by using your right hand to jam his hip and by lifting your front (left) knee to create a grappling barrier or "bubble".  At the same time, you pull your left hand back loading it for a strike. 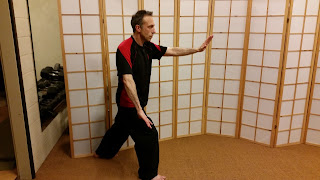 Then you step back and execute a palm strike/push with your left hand.

Okay, here's what I think the movement means.  I think it's a defence against someone jamming your lead arm and coming over the top with a right cross. 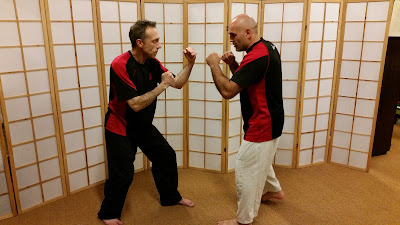 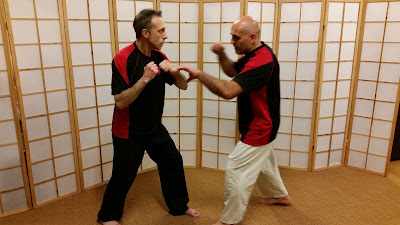 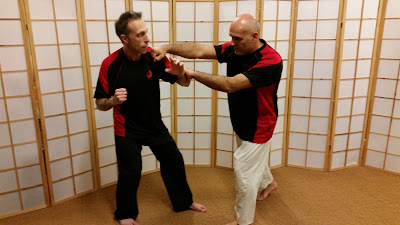 So how does the defence work? 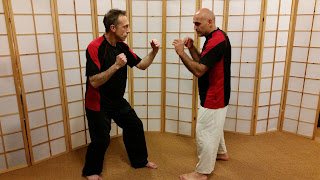 Armando and I are facing each other. 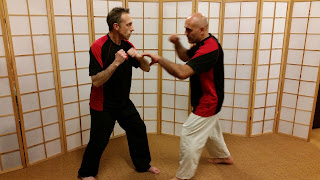 Armando lunges in and grabs my lead arm, aiming to jam it into my body and throw a right cross over the top. 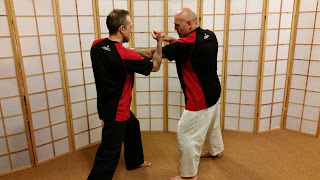 I respond by pivoting counter-clockwise on my front heel and slamming my forearm into his left elbow, cutting the supply line through his structure via his shoulders.  Even if the punch is redirected and gets through to land on me, it will have comparatively little force left behind it. 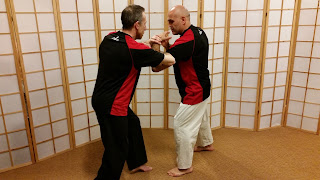 Armando's reflex will be to pull his arm away, especially to avoid an arm bar (assuming my initial joint attack did not quite succeed). 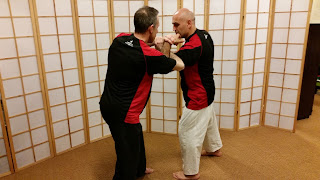 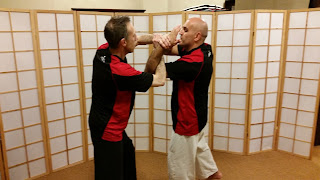 
I anticipate that Armando will resist it and counter with an extension of his arm back towards me. 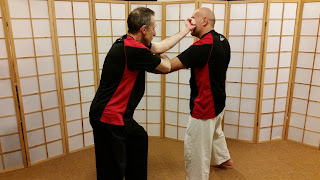 So I use the "spring energy" of his movement to slip off his arm and effect a rising inverted punch to his cheek using my left (lead) inverted middle knuckle.  At the same time I'm pulling back into cat stance so as to be out of range of his right cross.  My right hand is controlling his left. 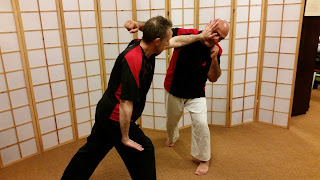 I raise my left knee (not shown) and stifle his hip with my right hand (not shown) to prevent him charging in for a grapple, so instead Armando responds with his loaded right cross.  My right hand has already taken some of the sting out of the blow by jamming Armando's forward momentum, but I quickly follow with a straight left palm to intercept and deflect his curved punch.  I combine this with a backward step into long stance (gong bu or zenkutsu dachi) which leaves my palm heel strike in range, but Armando's curved blow just out of it.

Of course there are many other applications of this sequence - this is just one idea, using qin-na principles to feint, provoke and predict certain responses.  This is particularly important against an agile opponent who is aggressively and speedily trying to invade your space.

In my view, this is the essence of "repulse monkey" in taijiquan.

As before, the technique is show in the video below: