Following on from my recent series of taiji qin na "clinics" I'd like to delve into another area - namely the fascinating way in which taijiquan techniques are geared towards countering each other, should the need arise.

In the internal arts, this is of course not unique to the art of taijiquan: you would already be familiar with my analysis of how, say, xingyiquan's 5 elements interact, each destroying the other in a giant game of "rock, paper, scissors".

Indeed, it makes sense for a sophisticated art to offer counters to its own techniques.
So let's have a look at how two of these interact.  I'm going to take one aspect of "repulse monkey" and show how "cloud hands" deals with the issue.

Repulse monkey as a "wrist out turn"

First, let's look at one application of "repulse monkey": as a "wrist out turn" (what the Japanese call "kote gaeshi").  This is by no means the main or even a major application of this movement in my book - but I still think it is one of the valid applications.

Let's look at the technique below: 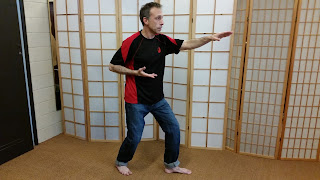 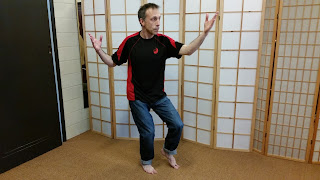 In this case I have my left hand out in front, so it will inscribe a counter-clockwise circle.  My right hand will fall behind and do the same. 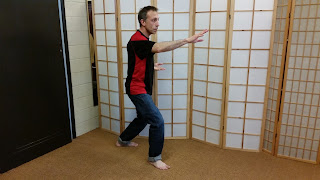 As I step back, I'll push out with my right hand while my left hand pulls back.

It is important to note that the "pullback" here is simply indicative of your support arm can be used in any number of ways - including as a loaded follow-up for the next attack.


How would this be applied?  Imagine your opponent has grabbed you with his left hand by the lapel with the aim of, say, punching you with his right. 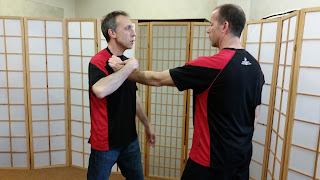 The circular action of the form simulates the "twist" of the wrist away from your lapel. 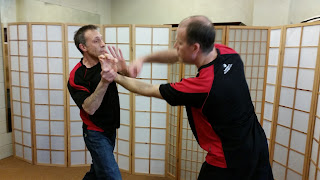 As soon as you twist your opponent's wrist, you should step back.  This not only moves you away from your opponent's punch, but it also keeps your twisting hand close to you while extending your attacker's hand.  Simultaneously, it brings your reverse hand up to "equal billing" as your legs pass each other.  The twist no only snaps the wrist, it also disrupts the "supply line" through the shoulders to any punch coming from the right arm. 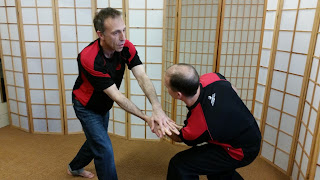 As you complete the step, use the "repulse" pushing motion to aid the twist of your opponent's wrist.

(Note, in this series of images, I actually have my legs reverse to how I should have them in the form - but it works both ways!).

As a technique, the "wrist out turn" seems pretty unbeatable, particularly once it has passed the "point of no return".  It's not so much a "throw" as people think from aikido, but rather a wrist break: it twists the wrist at an angle that the joint cannot tolerate (hence the warning pain - ditto with the xiao chan).

Thankfully there is an answer to this attack and it is found in the taiji form - within the movement known as "cloud hands".

Before I explain how this is possible, let me start by describing the cloud hands technique. 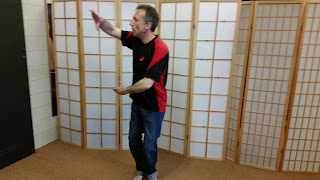 Cloud hands is found within every major school of taijiquan (at least to my knowledge).

Essentially it provides an encyclopedic reference to "expansion" (where movements like "brush knee" are focused on contraction).  The arms go through every possible angle for optimal use in an expansive context. 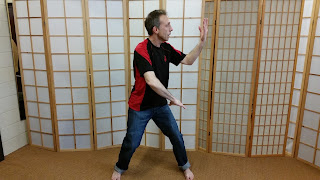 The movement is "side to side", rotating the arms which pass through the essential angles and planes, never staying static, but rather "rolling" like clouds. 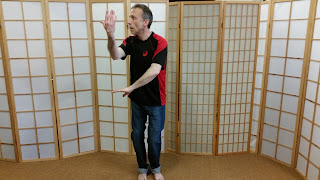 In other words, while these pictures appear to capture certain "postures", the movements shift so constantly that at any point the hand positions shift and change shape like formless clouds.

Since the "rolling" element is one of the principal features of cloud hands, it is no surprise that this can be used to "roll" out of a nasty predicament. 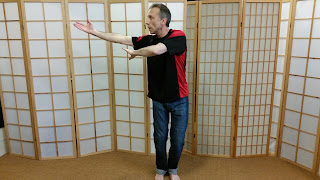 The sequence is repeated 3 times, then terminates with a "dragon body" movement - where your arms and body "flutter" like a flag (more on the application for this in a moment). 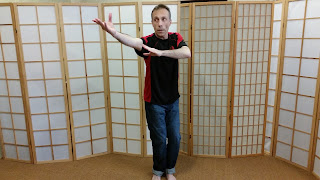 You can see that this action is rather "whip-like", moving your arms and hips in a staggered way briefly in one direction... 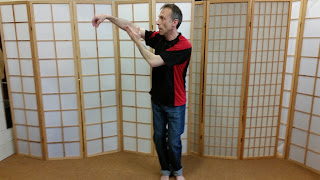 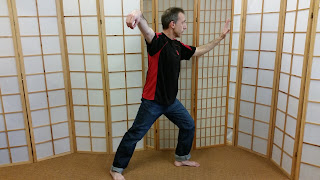 ... finishing with the sequence known as "single whip" (the fact that it's called single "whip" should give you a clue as to the dynamic of the body).

Let's go through the application: 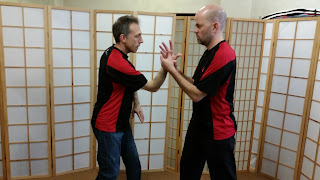 Andrew goes to apply a wrist out turn to my right hand.  I might be able to resist and lift my elbow up towards the ceiling in a counter-clockwise arc.  And that's a good way of getting out of it (the old "teacup" routine, for those who know the ancient Chinese exercise). 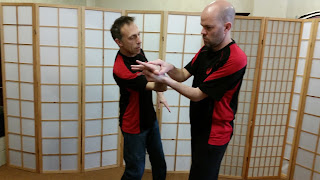 But here's the problem: often enough the wrist lock is applied far too quickly. By the time I react, I'm at the point of no return: where I simply can't must the strength to oppose the leverage which increases exponentially for every centimetre I'm pushed downwards. 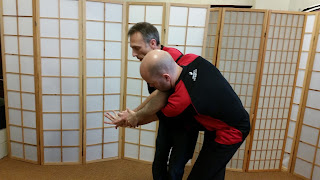 Now what arts like aikido teach you is to dive over the lock and roll out of it.  And that's certainly an option (albeit a rather grandiose and athletic one).

Cloud hands proposes a slightly easier solution.  You don't roll out of it on the ground - but rather on your opponent's back. 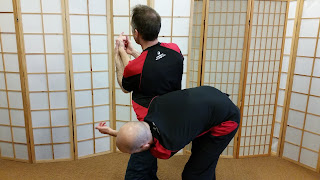 As I do so here, I manage to capture Andrew's right (augmenting) arm as I roll over. 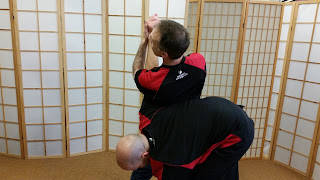 From here it's just a matter of leaning back and applying what is known as "wakki gatame" in judo/jujutsu.  I can lean back and simply drop him to the floor where I can hold him. 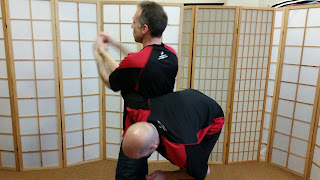 Alternatively I can do that little "dragon body" movement and snap his shoulder completely using a sudden, ballistic motion. 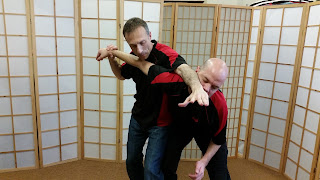 Of course, Andrew will be fighting this the whole way.  If I fail to hold him - or if I simply want a change of scenery - I can let him go, and then take him in the direction of his escape, using the rest of "single whip". 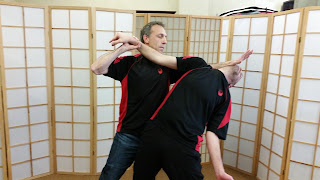 Using this method I can not only throw him, but I can hyper-extend his elbow at the same time.

The video below illustrates the application of this technique.

Next: How to beat "cloud hands"!