August 13, 2015
I've decided to "break the drought" in my martial writing by doing a series of coaching clinics. The I'm going to "kick off" (pardon the pun - you'll see why) with the move sometimes called "separate right leg".

It has often been interpreted as a kick - however with the toes in prominence it makes little sense to me. Here is the sequence: 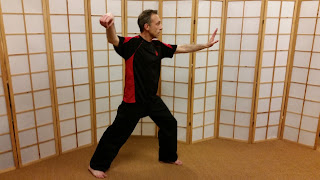 You start off in "single whip". 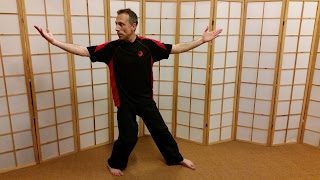 You open both palms and lean back.  You also happen to look back (more on why later, but the direction of gaze is important). 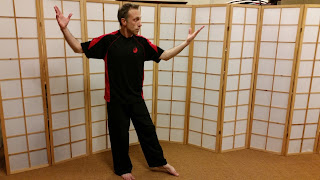 You preform an inward sweeping anti-clockwise move with your left arm and a corresponding clockwise turn of your right arm. 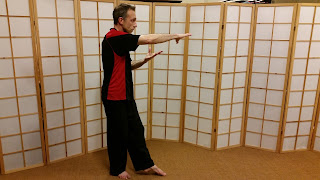 Your right arm then glides down at an angle over the top of your left which is pulled back slightly. 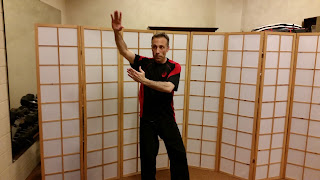 Surprisingly, you then sweep both hands back in a clockwise arc, looking at your arms as you do so.  Again, I'll discuss the significance of the head turn in a moment. 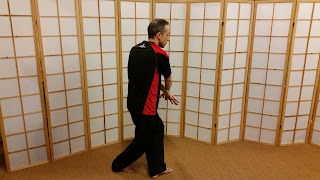 The arms continue in a circle until they are at low and crossed at your left side and you are in a twisted stance. 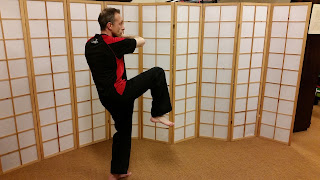 You then extend your right hand and right (rear leg) forward. 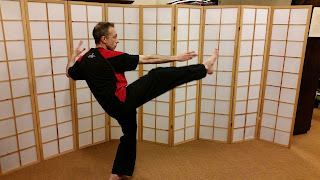 At the conclusion of the move your leg is extended, heading upwards, while your arm is extended moving downwards.

So what does it all mean?  Here's what I think:

I think the whole move is a taijiquan (tai ch'i chuan) "anti-grappling" technique - specifically an "anti-clinch" technique.  The idea behind taiji (as well as the other internal arts and most traditional civilian defence arts) is not to get tied up in a grapple.  And the easiest way for that to happen is to succumb to a clinch. 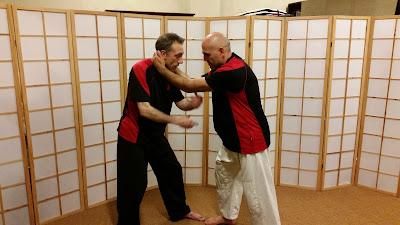 In my view, "separate right leg" provides you with a simple, yet ingenious, way of avoiding being caught up in a clinch as a precursor to being grappled.

Here's how I see one application of the sequence: 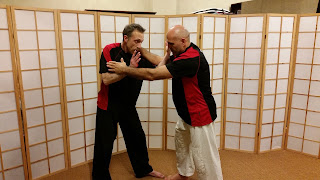 Armando has grabbed me in a clinch.  I use the opening movement of my arms to shift his elbows off my chest.  Even if I only manage to do this slightly, I'll have weakened his clinch - and his ability to follow up with a knee kick, a take down or some standing grapple.  You'll note that my gaze shifts from the front to the middle - which is exaggerated in the solo form as a "look back". 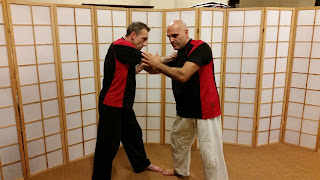 I immediately take my right hand and aim it for Armando's face.  Armando reacts by pushing my arm away at the elbow (which he can easily do as he is in contact and can sense my movement).  But in truth, this was a feint: I was heading for his shoulder, which I depress, upsetting his balance and his clinch.  At the same time I slip my left arm around and under Armando's right. 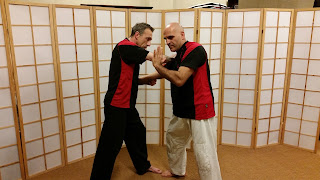 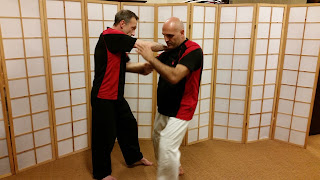 Armando realises his clinch hold has been compromised and does what a good grappler would do: he palms me off and goes for a pass, to shoot for my body.

I am of course expecting this, so I take my weight off my front foot and move it to the back and start turning my body to the right, as per the form. 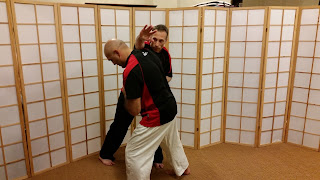 I continue the turn of my body and rotate my arms in a clockwise direction (again, as per the form).  Notice that my head is turning with my arms to follow Armando's movement.  My upper arm is used to ward off Armando's attempt to grapple me around the waist.  I'm still holding on to his right hand. 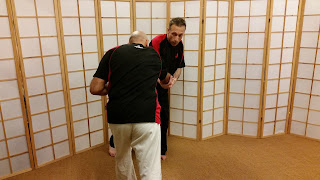 Having his pass thwarted, Armando turns to face me. I start to snap out with my back leg. Armando is now pulling his arm away from my grip, extending it at the elbow. 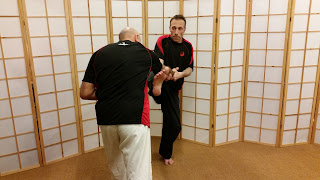 I snap upwards with my right (back) leg just as my right arm reinforces my hold and pushes down on his arm into the force of the oncoming kick.  My shin connects with Armando's arm just behind the elbow with a powerful snapping movement.1

I've noticed in practise that experienced grapplers will go for a "pass" in this situation.  Those who are more inclined towards stand up fighting will pull away.  The technique works either way, as I've illustrated in the video below, however I think it is only against a good grappler like Armando that full efficacy of the traditional form as an encyclopedic storage of traditional knowledge that we get a full appreciation for the beauty of the sophistication of taijiquan as a fighting art.2  This is evident in small details like the direction of the arm sweep, the turn of the body and the change in direction of your gaze.  Each element plays out perfectly in the application with almost no modification from the traditional form.  To me, that is pure poetry. 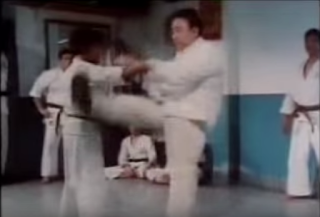 1. This application of an elbow attack comes to me via my Hong Yi Xiang lineage (Hong studied Chen Pan Ling taijiquan). While many folks might not think this "works", I can assure them that it is quite devastatingly simple and effective.  In this training, I didn't prime Armando as to what would happen either - I simply got him to clinch.  It's probably not apparent from the pictures, but his passing is excellent - yet my knee came right up under his elbow on cue.  And by the way, as an MMA trainer, Armando doesn't have any time for techniques that only "sort of work".  So yes - this technique (via Hong Yi Xiang's interpretation) works - and works well.

2. I've had a couple of people denigrate my video above as "crap".  I can't help but note that these comments have, so far, come from people who seem to be "infernal internals" - the type who think the "magic" of taijiquan (and the internal arts generally) lies in some sort of amazing "fajin" - a mysterious "short power" that causes people go hopping around like lunatics after a token shove (if that - sometimes it's "no touch").  Obviously my video doesn't show any such "fajin" - ergo it must be "crap"...

If you're one of those people and you're reading this, then please: just stop it.  You give taijiquan, the internal arts, and the Chinese fighting arts generally, a bad name.

I'm resolute in the view that the real "magic" of taijiquan lies in its scientific approach: in its efficiency, subtlety and reliance on skill, angles, timing, and narrowing (hence prediction) of responses.  It might not look as "flashy" as someone hopping around like a headless chook, but it's much more useful to me that some wishful thinking "magick".
civilian defence clinch grappling internal qin-na separate right leg taijiquan