August 16, 2015
Following on from my recent post concerning "separating the right leg" and its use as an "anti-clinch" technique, using your legs to counter, I thought I'd go to one of the last movements in the Chen Pan Ling taijiquan form - the related (rather mysterious) sequence known as "step back to ride tiger".

Here is a description of the technique: 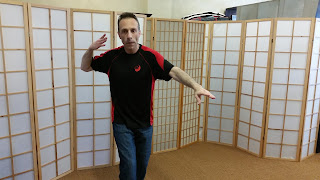 Starting from the previous position (not shown), step/pivot clockwise to the right to face an opponent.

As you do so, you extend your left hand out (this has an important function - I'll explain why later) and load the right hand near your ear. 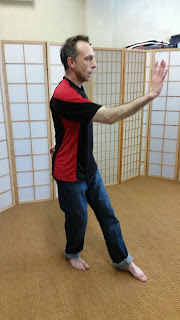 This is followed by a step forward with your left leg.  Again, this has a vital function which I'll explain in due course.

At precisely the same time, you extend your right hand forwards, leading with the knife edge of your palm which allows you to wedge your forearm in towards your opponent at an angle (facing downwards).

Your left hand scoops down and behind using the "cow's tongue" hand. 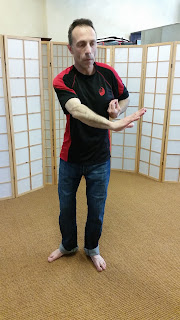 Pivoting your the ball of your back foot, you turn it so that your heels come together.

At the same time, your right hand turns over so that it is palm down (depressing) and your left hand cork-screws around tightly to the front. 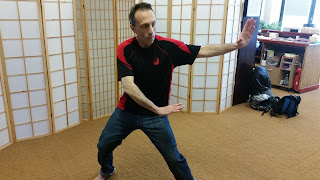 While extending your left leg deeply into your opponent in a horse stance, you simultaneously drive your left arm in so that the edge and corner of the palm is driven in towards your opponent's neck.  Your right hand stays low to serve as a guard. 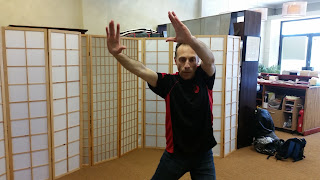 Both of your hands circle clockwise.  This is because, as you will see, you are controlling your opponent as he attempts to slip out of your grasp and go for a dive or other grapple. 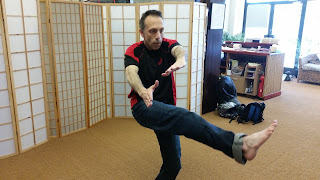 As your hands complete the circle your right leg, which is doing it's own clockwise circle but slightly delayed, swings up and your arms and shin meet in a powerful slap.

What is it all about?  I think it's primarily another anti-grappling measure: a defence against clinch and attempted tackle/shoot.  It's crucial to remember that taijiquan is not a grappling art so much as an anti-grappling art.  You don't want to be caught tied up to your opponent.  And a clinch is one of the quickest ways to succumb to a standing grapple (which can quickly lead you to the ground). 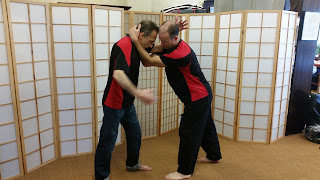 In this case we start with Jeff grabbing me in a clinch behind the neck.  He immediately starts to load for a right knee kick.

I respond with the first move of the technique, and that is I throw my right hand out to counter-clinch and push his elbow in, weakening his centre line hold. 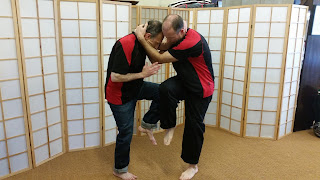 My response to his kick is again, as per the form.  I step my left leg in to occupy the centre line.  This should move under his incoming kick. 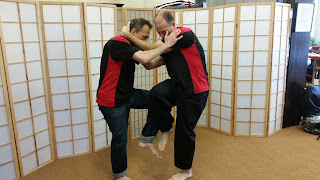 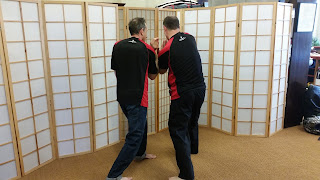 I now drive my right (reverse) hand in towards Jeff, again as per the form.  Because I drive it into the centre line from the right, I'm displacing my own left hand.  I use that to scrape his right hand clinch down and away (using the "cow's tongue hand" which features a friction grip rather than a grab).  My driving right hand wedges my forearm into Jeff's elbow, dislodging his clinch hold and pushing him sideways. 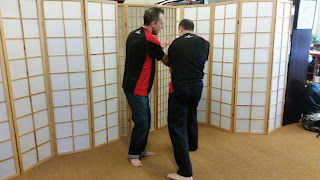 I keep pressing my momentum by turning my back foot in and corkscrewing my back hand into position for a neck strike... 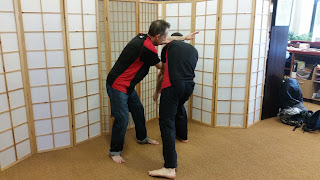 ... which I deliver at the same time as I step forwards with my left leg.  This forces Jeff's head down and back.

Notice my right hand stays in position to jam Jeff's left arm from causing me any trouble. 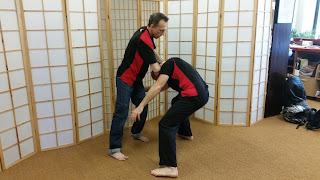 One of my "pet peeves" with applications I see on the internet and in books today is when this sort of neck push is assumed to cause the opponent to "fall away" in the direction of the push.1  In practise, I've found nothing to be further from the truth.  People slip out of such a push in a circular way.  In this case, someone determined to grapple you will simply weave around to tackle you around the middle.  Notice my arms follow Jeff as he tries to do this - as per the form. 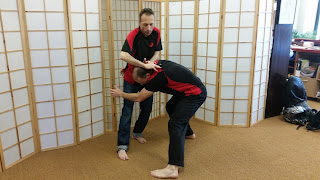 In fact, my arms follow him around to the point where he wants to dive in, then redirect his head, pushing it even further to the side.  While he manages to get a hold on my waist, it is tenuous, as there is a gap or "bubble" between his chest/head and his arms.

What I haven't shown is that my right leg can start to swing clockwise kicking out his right (back) leg at knee, further throwing him off balance. 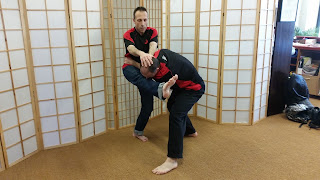 Regardless, by the time I have Jeff at the optimal position, I unleash my swinging right kick and connect with Jeff's face - using my arms to smash his head onto my shin as it is coming up.

Again, this is exactly as per the form. 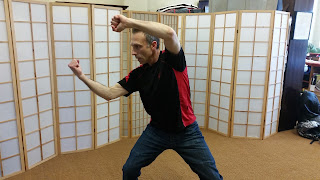 Incidentally the "tiger" bit comes at the end when you ram your forearm and fist into your opponent as he's falling after the kick:

The application can be seen towards the end of  the video below as well:

1. I've dealt with this previously, but honestly, you don't get anywhere if you think that your opponent will behave like some sort of dummy: that pushing on their neck will cause them to "fall" in the direction of your push.

In my experience, aggressive combatants don't like being pushed - and don't take it lightly.  At worst they resist and then come back on the same plane.  However a fighter with any skill (or simply good instincts and resolute resistance) will go with a neck push and weave back around.  A grappler will use the momentum to dive right back into your personal space - and take you down using that momentum.

In fact, in my observation it's human nature for most fighters to tend to dive into a grapple once they've been compromised at close quarters (especially using a short range lever like a forearm).

Why?  Because the alternative is to be sitting right in the middle of the melee range - squarely in the place where punches and kicks reach their maximum velocity (and hence their maximum force).  For most people it's safer to dive back into a tackle or clinch when they've been "levered off balance" at the neck.

The alternative is to try to retreat while off balance - not a good option.

As with "separate right leg", the particular application I've featured in this article expects, indeed harnesses, the "dive back into grappling range instinct" by moving with the opponent through the dive, redirecting and pushing them out into the melee range on the other side of your body - where they face the nastiness of your rising shin.

I think it's pretty darn amazing how arts like taijiquan anticipate movement - and realistic movement at that - from the opponent in such situations.  It's there, built right into the form: the knowledge of the ancients.